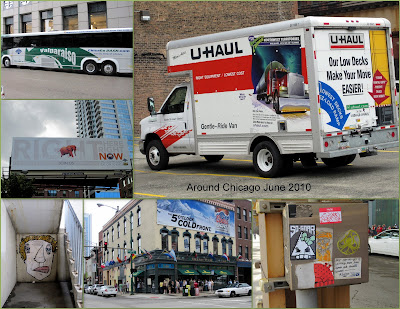 Just a few snapshots while walking around the city after summer finally arrived (along with big thunderstorms).  Middle left – a big billboard in my neighborhood saying that the GOP is going to try to make it in Chicago!  They definitely have their work cut out for them in this crony-run town.  Their site is www.ChicagoYrs.com and they are having a party at the Cubby Bear July 9.  The movie at this old post is from Cubby Bear when they were playing old hip hop from 20 years ago and the drunken crowd was going nuts post Cubs / Sox.  Upper left – they now have a bus that goes straight to Valparaiso Indiana from downtown with wi-fi and everything; now Gerry (our fellow blogger at LITGM) can get door to door service if he has to trek into down town for work.  Upper right – I think that the U Haul vans get painted based on where they are from, or perhaps that is an old-wives tale on the intertubes.  Either way, that truck must have taken a loooong ride to get from the Northwest Territories to Chicago.  I don’t think the average person owns much that is worth making that sort of trek; throw your snowshoes and parka on your back and leave everything else behind when you head out.   Lower left – some rather sophisticated graffiti art in my neighborhood, definitely not “tagging” unless some weird headed dude is marking his territory.  Lower middle – it doesn’t take much to get the expats in Chicago to drink (or anyone, for that matter) but Fado in my neighborhood is making a killing off the world cup.  That place is literally ground zero for drunks on St. Patrick’s day the line starts before 6am.  Lower right – I remember seeing stupid stickers like this all the time, it says “Most capitalism is nothing more than human and animal slavery”.  Hey, this isn’t high school, but this is probably where your art school tuition is going.  Good luck getting a job.