In researching old, on-line, US Army records on the use of flame throwing tanks and napalm bombs by US Army forces in 1945, Luzon, Philippines fighting. I found a 15 March 1945 report by the US Sixth Army Chemical Warfare officer. He stated that some time between 03 Feb thru 03 Mar 1945 — during the bitter urban fighting between American troops and a combination of Japanese naval base troops and three Imperial Japanese Army infantry battalions of the Shimbu Group — Japanese troops attacked troopers of the American 1st Cavalry Division with hand held and 75mm gun fired chemical munitions.

The Japanese crossed the chemical warfare threshold in World War 2.

Catured enemy toxic munitions on Luzon to date consist of tear gas (CN), vomiting gas (DC), and Chlorpicrin (ps). Isolated instances were reported of the use of tear gas and vomiting gas in the form of self projecting gas candles and artillery shells against elements of the 1st Cavalry Division in Manila. Indications are that the employment of these munitions was against the policy of the Imperial Japanese Army as no large scale coordinated attack utilizing available toxic munitions was attempted. The gas was employed by fanatical suicide squads defending the city. The enemy is capable of using blister gas in chemical land mines only. In case of such action. The contaminated areas must be by-passed as no protective clothing will be carried into the operation.

And American military commanders choose not to retaliate…immediately.

But they did plan to retaliate.

The senior officers who planned Operation DETACHMENT, the invasion of Iwo Jima in Feb 45, had agreed to attack the island with gas first.

When I first read about that Roosevelt veto, I had wondered why it was necessary. The USA had a chemical warfare “No-First-Use” policy in WW2. The American military did not initiate what we call “weapon of mass destruction” attacks independent of specific political authorization then, any more than they would today.

What this Sixth Army document means is that President Roosevelt didn’t veto American chemical warfare _first use_ at Iwo Jima by the US military.

The Japanese were buck naked in terms of Chemical defense versus an American mustard gas attack.

None of their cave or pill box positions had pressurized collective protection against chemical attack by persistent chemical agents.

After a mustard gas attack all their non-canned or air-sealed food, their water sources, all their weapons, and all their ammunition would be contaminated without enough protective clothing or decontaminating agent to make them usable. And mustard gas often stayed active in bomb proof dug outs in World War One for more than a week after it had dissipated in the surface.

Had we used gas, our Marines would have gone into Iwo Jima standing up, with most of our casualties being from serious heat exhaustion and burns from our own persistent blister agents.

I consider the passage I quoted above as a master piece of understatement and misdirection in light of the follow up request in the same annex, directing that the following be reported in the event of a future Japanese gas attacks:

c. In the event of the actual use of gas, a complete report is desired stating

weather conditions;
terrain features;
amount and kind of war gas used;
method of attack;
number of projectiles;
location of areas affected;
date and time of attack;
number and description of casualties (photographs if possible);
and any other pertinent data procurable.

Note that passage I found on the 1st Cavalry gas attack only answered, marginally, two of the requested 11 factors in the requested attack report template.

Nor did it list whether the “suicide squad” and its weapons were Japanese Navy or from one of the three Japanese infantry battalions the local IJA commander of the Shimbu group left to support the Navy.

The phrase “any other pertinent data procurable” means things like the uniforms of dead suicide troops, AKA were they Japanese Army or Navy.

The Navy commander in Manila was in mutiny to General Yamashita’s orders, but if the chemical munitions were from the Japanese Army, and used by Army troops, it makes Yamashita’s death sentence in a war crimes trial much more understandable.

It now looks like the “hypothetical” chemical weapon attack on Iwo Jima described in the CWS Green Book series was in fact a description of the chemical retaliation plan we were going to use at Iwo Jima, and that Pres. Roosevelt vetoed.

It also makes the “Further topics not covered in the minutes” for the June 18, 1945 meeting between Truman and the JCS over approving both the use of the A-bomb and the Invasion of Japan to take place if the A-bomb failed, take on much darker tones.

Especially in light of;

1) The gas attack plan military historians Norman Polmar and Thomas Allen found in 1995 (and Tom Holsinger wrote about over at Strategypage.com) that now looks certain to have been briefed then,

2) General Marshall’s comment about the use of gas against fortified Japanese islands, and

3) MacArthur’s criticism of the USMC casualties on Iwo Jima.

Any number of very important historical questions come to mind based on this attack happening.

Here is one for you to consider:

Was General MacArthur’s shot at the number of USMC casualties on Iwo Jima a political marker being laid down against the future. A marker that got him the supreme command for the Invasion of Japan from Pres. Truman?

MacArthur accused of played political games with the Republicans to pressure Roosevelt to sign off on the Philippines invasion instead of Formosa invasion that the Joint chiefs of Staff preferred.

Doing the same thing with a Japanese gas attack and the high casualty fiasco at Iwo Jima seems right up his alley.

The American Army over ran a significant, but unnamed amount of Japanese chemical weapon stocks in Leyte.

I have read a large number of histories of the 1941-45 Pacific War, and this was the first time I had read anything like this:

1. Enemy Chemical Warfare Activities
The Jap Leyte garrison was prepared both Offensively and defensively for gas warfare when American forces landed. Munitions filled With tear gas (CN). vomiting gas (DC) and nerve poison (AC) were found in captured ammunition dumps. PWs stated that all unit from companies up were supplied with toxic munitions, including 75mm blistering gas (H or H-L) filled shells. Captured documents reveal that orders were issued in July 1944, to all troops in the LEYTE area to the effect that special smokes and other gas munitions would not be used without a special order and that in View or the Allies’ preparedness to resort to chemical warfare no excuse would be given them for retaliation. It may be inferred that a decision by the Japanese on whether or not to use gas will be based entirely upon strategical considerations.

I said in the comment section of my first Okinawa 65th anniversary post that academics were ignoring post-Cold War declassified documents about the end of gas warfare at the end of World War Two.

What I never expected was to personally find something this big to underline that fact. 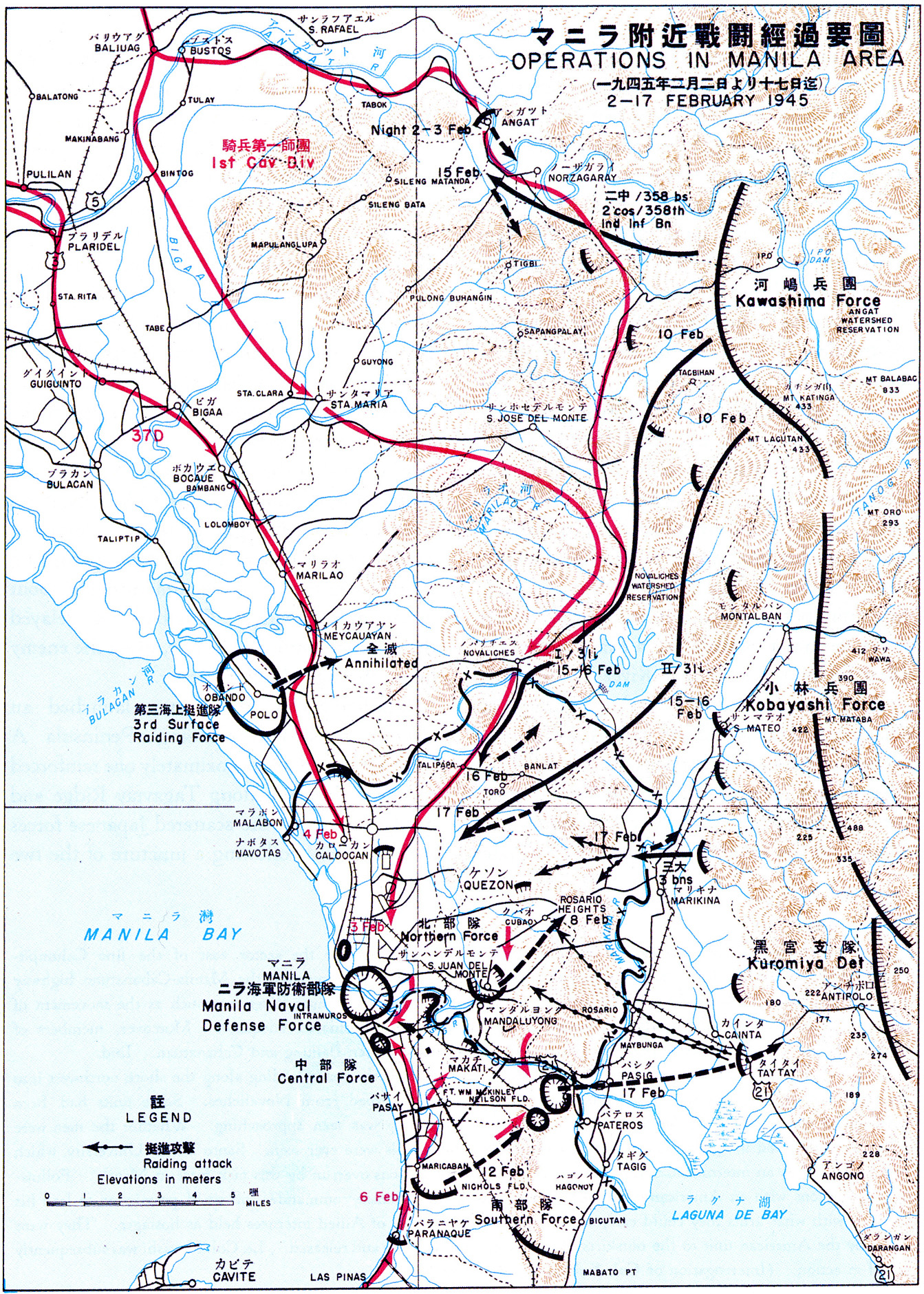 A Japanese Map of the Battle of Manila, 2 February-17 February 1945