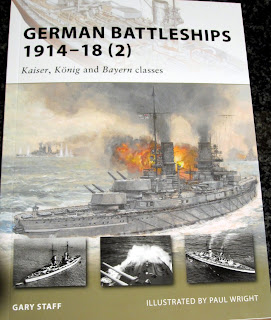 It finally arrived!  My copy of “German Battleships 1914-18 (2)” from the fine Osprey series came and I immediately sat down and read through it.  The book is a quick read at 48 pages but it is filled with diagrams, great photos, and detailed drawings of the three major late generation German World War One battleships, the Kaiser, Konig and Bayern classes.

Prior to World War One the British and the Germans engaged in an arms race to build mightier navies, with each side attempting to out-do the other with each succeeding generation of ships.  The ships got larger, more heavily armored, and were armed with larger caliber main armament.  The Kaiser class battleships have the odd turret configurations used in that era; the Konig looks more modern, and the Beyern class has very similar lines to the iconic WW2 Bismark series ships, along with the same caliber armament (15″ guns, in 4 double turrets).

One of the most interesting elements to me is the fact that the Bayern class is so relatively unknown given how powerful and modern they were relative to their WW1 contemporaries.  This is likely due to the fact that the Bayern did not participate in the Battle of Jutland in 1916 which was the seminal act in WW1 fleet battles, for afterwards the focus of the German navy shifted to submarines and unrestricted submarine warfare in 1917.  The wikipedia page for the Bismark series discusses how the Bismark series was derided by one British analyst as just a mildly upgraded Bayern class vessel.

Also interesting is the fate of the Baden (the second and final ship of the Bayern class); as discussed at the wikipedia link, the British saved it from being sunk at Scapa Flow and used it to test out their armor piercing weapons at close range.  They sank it once and then refloated it again, and used this information to refine their ammunition and change their armor design.  This page describes a diver who has been to the wreck several times at 180 feet, which is a deep depth for this type of diving (per the article at least, I am not an expert).

The book discusses the practical trade-offs that the Germans made; they fitted their ships with smaller caliber, accurate and quick-firing weapons, rather than being seduced by large caliber weapons, feeling that it was better to invest in heavy armor and solid ship construction than to plan for a long range duel.  This was also due to fiscal diligence; throughout the book they discuss how the government made concessions to stretch their budget.

The fact that they did not delay Jutland for the launching of the Bayern (the ship was undergoing trials and the crew was on leave) is also interesting; in 1943 Hitler delayed the start of Kursk so that more of the modern Panther tanks could be brought up to lead the offensive.  The “meddling” so common in the second war seems less common in the more practical first war; this also shows up in how the Germans shortened their lines and implemented “reverse slope” defenses on the Western front to turn their attention to knocking out the Russians in the East – it seems hard to imagine the second war Germans making such a sensible decision.

The level of investment that these ships represented for the economy at the time was enormous; imagine if our best minds and a huge chunk of our entire infrastructure was devoted to building these enormous machines.  Individual citizens at that time had few possessions, much less radios or excessive clothing; to think of how these resources could have been deployed for the civilian economy if that type of choice was available.

9 thoughts on “Battleships and the Past”