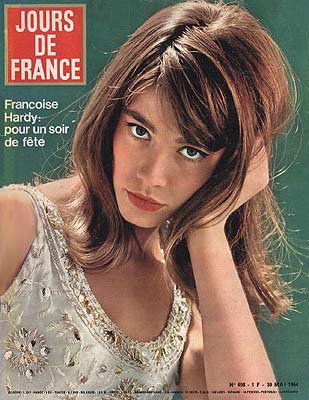 I was riding in a cab from the airport, and I had a Francophone African cab driver. He had a lot of trouble figuring out where Oak Park was. But I forgave him because he had a totally excellent tape of some French women singing pop songs and country western songs. I tried to get him to tell me who it was singing and his linguistic debility was a real obstacle. I tried to write down what he was trying to tell me. The one name I correctly got out of him was Françoise Hardy. I looked her up and bought The Vogue Years. It is a good record, with a nice period sound. (I may buy another one from her late ’60s period — any tips?)

As it happens, she was a hugely popular figure in the ‘60s, and I’m surprised I never heard of her. She was apparently the Queen of French pop. The site I linked to above, “All Over the World” is absolutely smashing, a real labor of love. See for example the page of Magazine covers. (The picture above is from there.) How much effort must have gone into pulling that collection together? Mlle Hardy was clearly one of the great beauties of the age, in addition to making some pretty fine records. Her cool, unsmiling, aloof look, to say nothing of her understated but hip fashion sense, goes along well with her her musical style. Moreover, she was part of a scene which is well documented on the ye-ye girls website. This site, too is an incredible thing, another labor of love. After poking around on the Net a little bit, I think I’m going to get a France Gall (and here) record next. (Again, any tips?)

While I’m at it, if you are a fan of 60s style and pop culture, you must check out the Swinging Chicks of the ‘60s website. Lots of cool stuff. It reminded me of the altogether wonderful Julie Newmar — whose chief claim to fame was playing Catwoman on the old Batman TV show. Damn she was beautiful. I thought so when I was about six years old, and I think so now. TV has really declined since those days, baby.