When the second world war ended, and the boys began to come home in 1946, my parents held parties for all of those who came back to Chicago. Many were friends of my cousin, Bud Kerrison, a B 17 bombardier who served in North Africa. Bud flew 50 missions; the 8th Air Force flying out of England only had to complete 35 missions because their loss rate was higher. His friends, some of whom were from Chicago, had similar military records and had served with him in the same theater. In addition to his Chicago buddies, a bunch of friends from other cities came to the parties and quite a few of them stayed. Why ? Bud had two beautiful sisters and they had a large number of beautiful girlfriends. 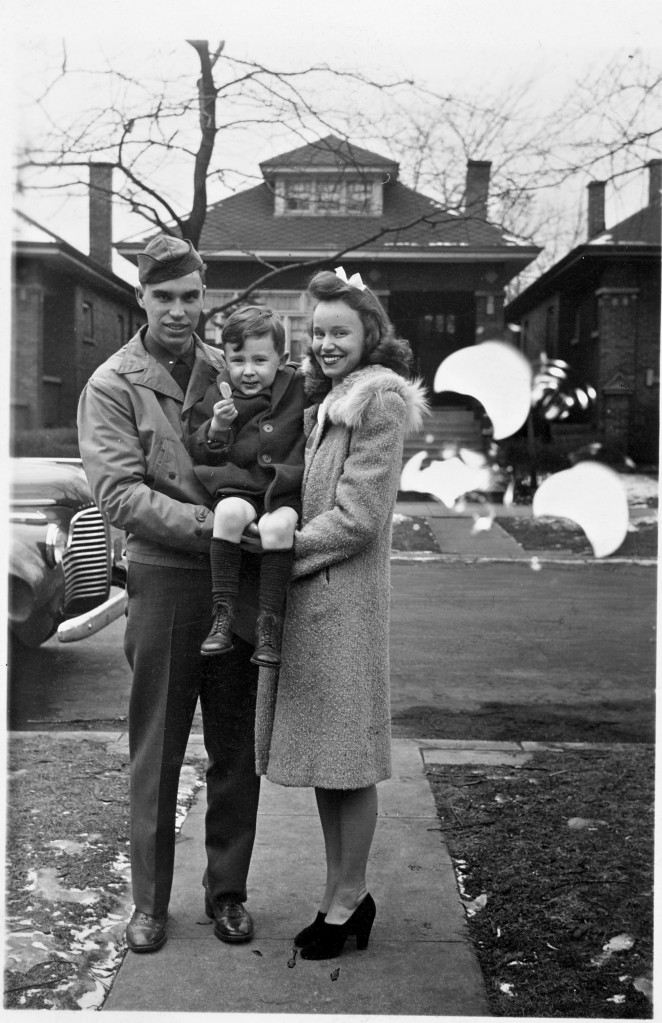 Here are Bud and Marion with me in the middle.

There were quite a few marriages that began with my parents’ parties and my mother kept in touch with many of these couples until she died 55 years later. There were a lot of beautiful girls and they all stayed married to the guys they met at the parties.

One of the friends of Bud who stayed on was great big guy named Frank Flanagan. His father was Chief of Detectives in the Philadelphia PD and, as some might say, if cut, Frank would bleed blue. At that time, and for years afterward, the Chicago PD was corrupt but, as in any big city department, there were pockets of career officers who maintained the honor of the profession and were respected even by the corrupt among them. One such was the father of Pat Neary. She was a beautiful girl with a Irish smile. Her father was an Inspector of the Chicago PD and a great guy. I was about 8 years old then and was fascinated with a tie clasp he wore that had suspended from it a tiny revolver. The tiny pistol worked mechanically and the trigger could be pulled and the cylinder would revolve and the hammer would fall, just as with a real pistol. He told me it even shot tiny bullets but I fear that may have been an embellishment. There are such tiny working guns, so maybe he wasn’t exaggerating after all.

Many of those girls from 1946 stayed beautiful into old age. I haven’t seen Pat in 20 years but she was trim and beautiful with a slight Irish accent the last time I saw her. She had three beautiful daughters. 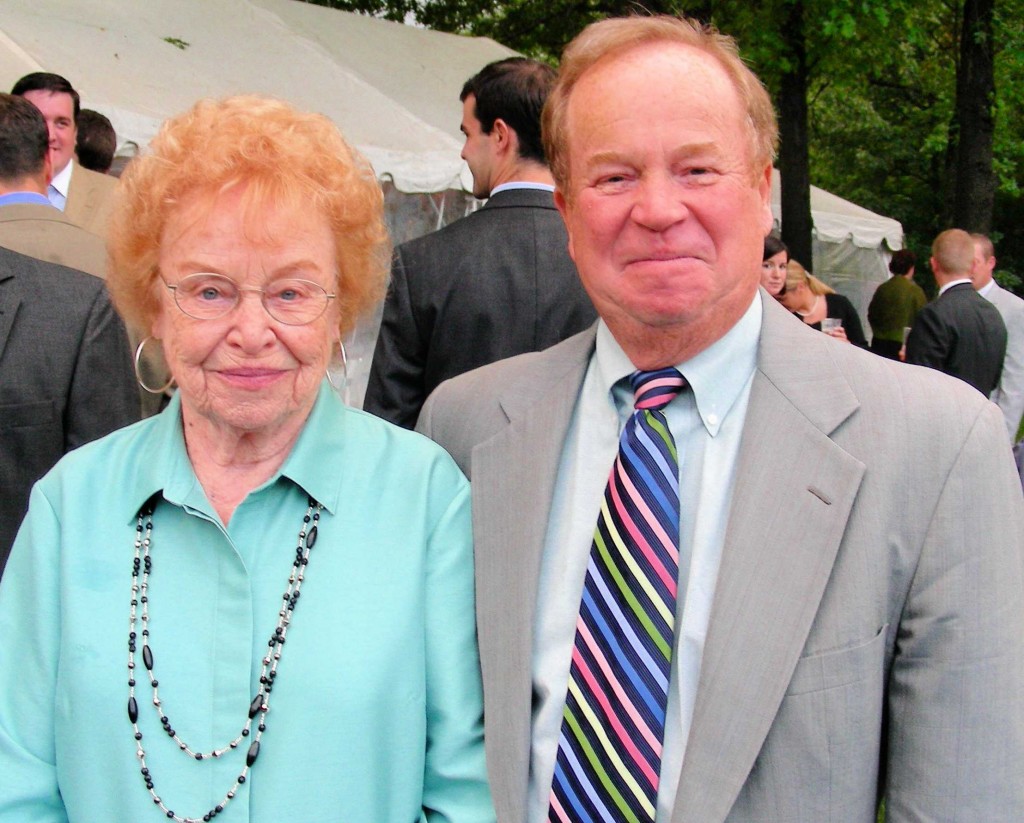 Marion still looks pretty good at the age of 92. That’s her son Kerry who is 65. She lives alone in a nice condo and goes to the movies with my sister every week.

Anyway, Pat and Frank got married and lived happily ever after, except for one small problem. The Chicago PD pay scale was lousy. They could not afford a house for years and Pat drove an old clunker of a car. My father used to show up with piles of toys for the kids but no one doubted that the purpose of the low salary was to keep the policemen susceptible to bribery. Frank put up with it and there was never a whiff of anything improper about him. The crooks in the department knew this better than anyone else and so a little conspiracy was launched to protect Frank, and probably others like him, from the hustlers. The Mafia had a stranglehold on Chicago and the one place where someone like Frank was least likely to run a foul of organized crime was hit and run accident investigations.

Frank became chief of Hit and Run. A few years later, Life magazine ran a special feature on him as the first crime lab in Chicago law enforcement history began to get results. They developed means of identifying paint chips recovered from accident scenes and then identifying the make, model and year of the car the chip came from. That is no big deal now but it was revolutionary then. The rate at which hit and run crimes were solved became phenomenal. The Life Magazine feature began with a photo of Frank answering the telephone with his signature greeting, “Hit and Run, Flanagan.” He went on to Homicide and thrived as a good Homicide detective.

In 1960, everything changed. The city was hit with a monumental scandal when it was discovered that a burglary ring was run from a police district on the North Side. Corruption had taken over the department and Mayor Daley was faced with a desperate need for a respectable figure to take over the department and clean it up. He found him in a Harvard Professor named Orlando Wilson. Daley was desperate and this gave Wilson enormous power. He could have just about anything he wanted.

In 1960, Chicago mayor Richard J. Daley, in the wake of a major police scandal,[6] established a commission headed by O.W. Wilson to find a new police commissioner.[7] In the end, Daley decided to appoint Wilson himself, as Commissioner.[8] Beginning on March 2, 1960,[4] Wilson served the Superintendent of Police of the Chicago Police Department until 1967 when he retired.
Reforms demanded at the outset by Wilson included establishment of a non-partisan police board to help govern the police force, a strict merit system for promotions within the department, an aggressive, nationwide recruiting drive for hiring new officers, and higher police salaries to attract professionally qualified officers.[8]

Wilson began searching the department for honest and competent men. He found Frank Flanagan in Homicide and made him Chief of Homicide. Among the big homicide cases investigated by Frank was the Richard Speck case, in which Speck raped and murdered 8 student nurses in one night. It was a huge sensation in Chicago for years.

Here is a copy of a Chicago police newspaper (pdf) with a story about Frank and a photo of Pat and his three daughters. Pat is still beautiful there, 18 years after they met at my parents’ party. The two stories about Frank are on pages 4 to 7. I am still trying to figure out how to copy those images. That link is bad but here is a new one that works. Here is Frank’s obituary.

I got stimulated about this after reading a post at Patterico by Jack Dunphy. Dunphy (a pseudonym) wonders what is wrong with Chicago? Crime is out of control and nothing is being done, or at least it seems that way. The details of the sickening situation are here. My brother-in-law is a retired CPD officer. He was retired by the time the situation as described arrived but he was constantly frustrated in the promotion process as affirmative action was in full flower then and only blacks were considered for promotion. If there were not enough blacks applying, some white officers would be considered. The linked article does not mention race but you can be sure it is a huge factor. My brother-in-law finally gave up and stopped taking the sergeants’ exam, a disservice to my sister, but he was sick of watching the list posted every six months.

Frank died a few years ago and, unfortunately, had no sons. He and Pat (still with us but ailing) were the products of a tradition of police families. Maybe, if there was a Flanagan on the force, things might be better. In addition to his police service, Frank was the commanding officer of an Army Reserve unit in the city. He retired a full colonel. There aren’t many like him. Among other things, he was a big, hearty, friendly guy and he never lost his Philadelphia accent.