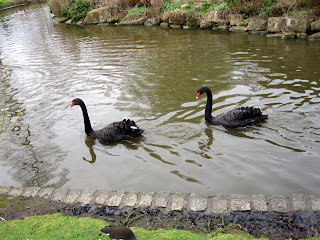 Thom Yorke wrote a song called “Black Swan” that resonated with me in terms of the financial crisis of 2008-2009 (and today) commonly called “The Great Recession”. He wrote the song in 2006.

The “Black Swan” was a metaphor used by Taleb in his excellent book “Fooled by Randomness“. The point of that book (broadly stated) is that people under estimate randomness and long-tail events; Taleb is an options trader specializing in the valuation of far-out-of-the-money options and whether or not they are fairly priced. The metaphor specifically for the Black Swan is that no one ever anticipated that there was a black swan; all swans were expected to be white and it would be viewed as a very remote or unanticipated event if a “black” swan were to turn up.  When settlers reached Australia, however, they were surprised to find black swans, meaning that they had significantly under-estimated the probability of this event occurring.

While you can’t directly tie art to a particular business concept I liked the part of being “ground in the bitumen” and then general feeling of being lost and angst that is summarized as “this is f*cked up, f*cked up”.

From the lyrics of the Thom Yorke song…

Be your black swan, black swan
I’m for spare parts, broken up