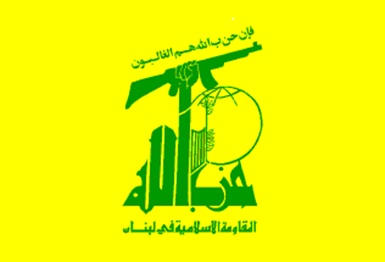 A day or two ago, Abu Muqawama asked whether the Hizballah flag showed an AK-47, and in general what flags carried what weapons as emblems.

As it happens, I’d just been viewing a pro-jihadist United States of Islam video and made the following screen-capture as an illustration of my continuing concern about the “black flags of Khorasan” and the issue of whether AQ and or its franchises and or portions of the Taliban consider themselves to be fighting the apocalyptic war of the end of time. 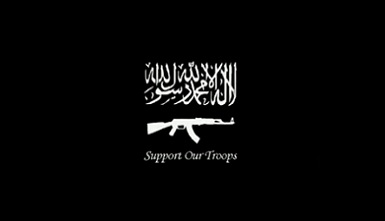 Note also that the filmmaker’s ironic borrowing of the phrase “Support Our Troops” to urge support of the troops of the Mahdi will not be lost on some viewers.

This screen-capture, from the United States of Islam video, in turn reminded reminded me of the Saudi flag, which likewise carries the shahada or Muslim profession of faith and a weapon – a sword.

According to a note on an earlier version of the World Flag Database:

The script in the centre of the flag is the Islamic creed, “There is no God but Allah, and Mohammed is the Prophet of Allah”. The flag is therefore considered sacred and special protocol rules apply: the flag does not dip in salute, nor is it ever flown at half-mast. Note that the creed always reads properly from right to left, with the sword hilt to the right, so the reverse of the flag is not a mirror image of the obverse. When making the flag, the creed must be reproduced precisely, including the accent marks. The use of the flag on any commercial item (especially clothing) is not recommended as it might be considered inappropriate, or even insulting.

The Shahada is the central testament of faith of Islam, as is the Shema Yisroel of Judaism and the Credo of Christianity, and I respect it as such — and likewise the Saudi flag., on which it is displayed.

Flags, however, are potent symbols, and the graphical power of the “black flags of Khorasan” motif should not, in my view, be underestimated. The particular video that I took that screen-capture from makes use of “mix” flags of its own devising: 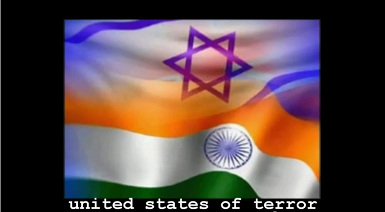 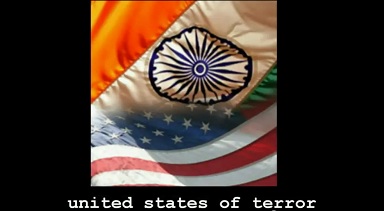 And that conjunction of India with Israel bears thinking about, too… not only in terms of military aid between the two nations, but also of the symbolic juxtaposition of the Al-Aqsa Mosque and Jerusalem with the Babri Masjid and Ayodhya…

Indeed, the Indian flag itself also deserves consideration in our context. 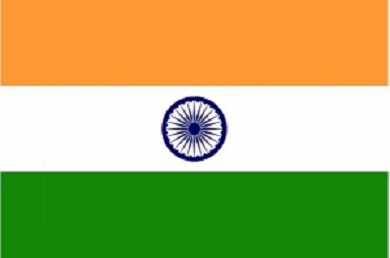 Originally, Mahatma Gandhi had hoped that it would feature the charka or spinning wheel which he had made famous. As an informative article on the subject from The Hindu puts it:

For Gandhiji, the charka represented not a mere hand-spinning device that could provide employment and income to the poor, but much more. “The message of the spinning-wheel is much wider than its circumference. Its message is one of simplicity, service of mankind, living so as not to hurt others, creating an indissoluble bond between the rich and the poor, capital and labour, the prince and the peasant.” (Young India, September 17, 1925). “Above all, charka is a symbol of non-violence” (Collected Works of Mahatma Gandhi, Vol. 71, first edition, p.234).

Gandhiji was, therefore, all the more sad when a correspondent from Hyderabad brought to his notice, on the eve of Independence, K. M. Munshi’s indictment in his broadcast speech that the wheel in the new flag represented the Sudarshana Chakra (discus of Lord Vishnu), a symbol of violence! But Gandhiji consoled himself that “under no circumstances, can the Asoka Chakra become a symbol of violence as Emperor Asoka was a Buddhist and a votary of non-violence” (Harijan Sevak, August 17, 1947).

So there’s another weapon-flag connection — albeit one where non-violence seems to triumph over violence.

But let me get back to the yellow Hizbollah flag with which we started, and quickly note the resemblance (which I don’t claim to be the first to note, but cannot presently find my source for) between its portrayal of a rifle raised in a victorious fist, and this poster from the Irgun: 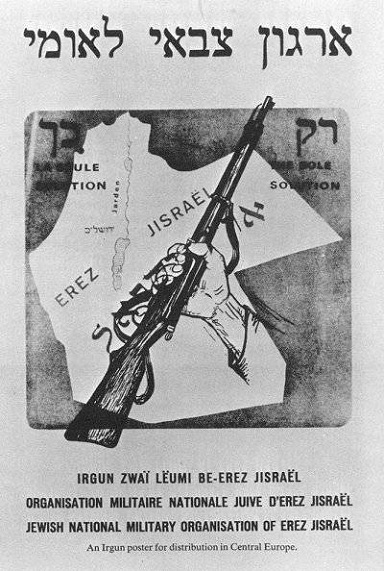 And that’s enough about weaponry and flags for now, I think.

I hope to follow this post up shortly with a more detailed account of the United States of Islam video mentioned above, and its many and curious references and resonances.

18 thoughts on “Of Weaponry and Flags”