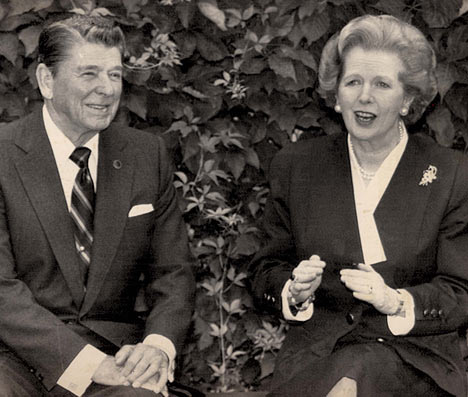 Welcome to the Ronald Reagan Roundtable at Chicago Boyz.

A few presidents have put their stamp on this nation and even fewer have done so on the world. While the top tier historical position is held, by nearly universal accalamation, by Abraham Lincoln and Franklin Delano Roosevelt, a select number of presidents occupy the second tier of greatness, having by their words and deeds changed America and their times, for better and for worse. Among this group, I believe, is Ronald Wilson Reagan, who entered office as the oldest man ever to be elected to the presidency and left it when a new world was being born.

Ronald Reagan would be 100 years old today, having missed the mark by a mere seven years. It would be too much to say that this has been the century of Ronald Reagan, but we should take time on this anniversary to reflect on how Reagan impacted his century. What is the legacy of President Reagan? That is the question for this roundtable, one we hope to answer in the next ten days.

All Chicago Boyz bloggers, whose names appear on the margin – including but not limited to Lexington Green, Joseph Fouche, Jonathan, Charles Cameron, Onparkstreet and Dr Helen Szamuely –are free to weigh in on this question, but we are very pleased to also have some special guest bloggers as participants in this roundtable who I would like to take a moment and introduce:

Dr. Steven Metz: Dr. Steven Metz is Chairman of the Regional Strategy and Planning Department and Research Professor of National Security Affairs at the Strategic Studies Institute. Dr. Metz has a distinguished academic career and has served on numerous government and private sector advisory panels for national security and military affairs. He currently serves on the RAND Corporation Insurgency Board and blogs for The New Republic and National Journal. Metz. is the author of Iraq and the Evolution of American Strategy and is working on a book entitled “Strategic Shock: Eight Events That Changed American Security.”

Steve Schippert: is a co-Founder of ThreatsWatch and of the Center for Threat Awareness where he serves on the Board of Directors. Steve is the Managing Editor of ThreatsWatch and is the Producer of its FireWatch program. Steve served in the U.S. Marine Corps from June 1985 to June 1993, including service during Operations Desert Shield and Desert Storm to liberate Kuwait. Steve has also been published in the Washington Times and online at the Weekly Standard and the National Review and is currently a regular contributor at National Review Online’s MilBlog, The Tank. Steve is Crane Durham’s terrorism and national security expert on Durham’s Nothing But Truth daily national radio broadcast on the American Family Radio Network. Steve has also provided terrorism, security and military analysis on The Hugh Hewitt Show, The John Batchelor Show, The Martha Zoller Show and others, and his written work has been featured on MSNBC.

Joseph Guerra: is a former US Marine and Army intelligence officer who served in a civilian capacity in Berlin during the last decade of the Cold War. Guerra was involved as both an intelligence operations specialist and an operations officer in strategic overt humint collection and now blogs and posts on the internet under the moniker “seydlitz89″ and can be contacted at seydlitz89 at web.de. He lives with his family in northern Portugal and works in education. His latest paper is, “The Clausewitzian Concept of Cohesion as a Theory of Political Development,” which was developed from one of his posts on the Chicagoboyz Clausewitz Roundtable. His writings have appeared at Clausewitz.com, Defense and the National Interest and Milpub.

Shane Deichman: has spent nearly two decades in the national security field as both a scientist and a manager. He is a 1994 graduate of the U.S. Naval War College. He spent four years in the Fleet Marine Force as a science and technology advisor. Shane founded his own company in 2008 (EMC2 LLC, a consulting company focused on emergency management and disaster preparedness) and is a consultant at the National Missile Defense Agency. He blogs at Wizards of Oz, Dreaming 5GW, and Antilibrary and was a contributing author to The John Boyd Roundtable.

Historyguy99: is a historian, and U.S. Army veteran of the war in Vietnam. After having a 30 year career in global logistics, he earned an advanced degree in history and began to teach. Currently he is an adjunct history professor with the University of Phoenix and Axia College. He blogs as historyguy99 and hosts HG’s World, a blog devoted to history, connectivity, and commentary. He is a co-author of soon to be published, Activist Women of the American West and contributing author to The John Boyd Roundtable.

James Frayne: James Frayne is a London-based political consultant for Westbourne Communications who edits the blog, The Campaign War Room.

Kanani Fong: is the military outreach coordinator for the acclaimed Afghanistan war documentary RESTREPO and is a writer for PBS site Regarding War. The wife of an Army Surgeon, Kanani operates the popular and influential milblog Kitchen Dispatch

[Note: Cheryl Rofer has graced Chicago Boyz on several occasions and may participate in this roundtable as time permits]

Cheryl Rofer: Cheryl’s career has moved from the hard sciences to the social sciences, the hard sciences informing her analysis of international relations. With an A.B. from Ripon College and an M.S. from the University of California at Berkeley, both in chemistry, she has worked on the nuclear fuel cycle, fossil fuels, lasers, technologies for destruction of hazardous wastes and decommissioning of nuclear weapons, and management of environmental cleanups from New Mexico to Estonia and Kazakhstan. Her travels have taken her to both countries, and she is learning Estonian. She blogs at Phronesisaical.