Today was a learning day for Cornflake and me. Our elders had warned us not to underestimate the raw size of Montana. We scorned their advice, thinking to ourselves, “My what great time we made today. There’s no doubt we can get through the rest of the state in mere hours. We are truly as mighty as the gods themselves.”

If you cannot guess the result of such hubris, we leaned proper respect for these wise old ones’ great experience. Montana, east of billings, becomes monotonous and sedating, an endless path of hilly shrubland and miniscule farm towns. We greatly underestimated its length and suffered a moral hit as a result. Thinking we could drive hard and reach Minnesota was pure folly.

Communist Saboteur activity was limited to unnecessary road work and a few suspicious tails. I think we had them running scared.

As a note to potential travelers, northern Wyoming along I-90 is one of the most tedious tracts of road you can take outside of Nevada.

Conversation of the day, focusing on space exploration and river systems:

Cornflake: “Man, when I finally get a planet to colonize, I think I’ll name the biggest river Asshat.”
Mojo: “The Asshat River, huh? ”
Cornflake: “Yeah, and I’m going to recruit all foreigners as colonists, so they won’t know what it means.”
Mojo: “That’d be pretty sweet. Hell, you might as well name the whole star system Asshat…”
Cornflake: “Why the hell not!”
Mojo: “I can hear it now, ‘Red Alert! Ensign, maximum warp to the Asshat system!'”

As I said, it was a long drive.

South Dakota, somewhat to my surprise, is a delightful state, and boasts some tremendous sights. The Badlands in particular are quite stunning, and served to raise our spirits greatly from their previous lows.

I’m currently in Murdo, South Dakota, paying far too much for a room in the local Days Inn, stuck on dialup access. In the interest of brevity, I shall attempt to present the following images with a minimum of commentary.

First, we have some images from west-central Montana: 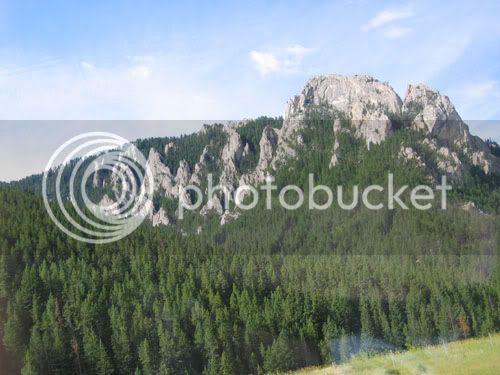 Past Billings, this is it:

Cornflake, mildly amused by the sound of Captain Kirk coming to the rescue to the residents of the Asshat system:

The most interesting site in northern Wyoming:

The rest of northern Wyoming:

I was able to resist a visit to Little Bighorn, Yellowstone, and Mt. Rushmore. However, thousands of signs placed in a 100 mile radius convinced me that I had to see the infamous Wall Drug:

I should have enjoyed it, but found it far too self-aware to be truly amusing.

I shall post several pictures of the Badlands later, along with some panoramas I need to stitch together in photoshop. For now, here’s a taste:

And the long twilight drive to Murdo: