– Government is fair, transparent and effective
– the private sector is scheming and opaque

The general public didn’t always feel this way. Back when the “Reagan Revolution” swept through he made the famous crack that we should always fear the comment “We are from the government, and we are here to help you”. There was a widespread belief that the private sector should lead the way and that government should play a supporting role, running things like the military and infrastructure spending, but not to generally take over key functions of the economy.

Younger people, in order to get into any sort of exclusive college, need to “volunteer”. In past years’ in the US volunteering typically meant joining a constructive organization or working with your church, but now there are a wide array of programs that students filter through in order to have a convincing resume to apply to these selective schools, and likely putting down church activities doesn’t help much at all. I think that people are confusing these sorts of volunteer organizations with the reality of how governments actually work, which is quite different, since government organizations have an innate tendency to 1) propagate 2) expand their domain 3) put themselves first in terms of salaries and benefits rather than focusing on value to the taxpayer. These sorts of behaviors also occur amongst volunteer organizations but not to the same degree.

People also have a more trusting belief that the government role is actually EFFECTIVE. In reality, government is usually a bystander when events occur. For instance Sarbanes-Oxley was invented in the wake of Enron to prevent financial scandal through making companies’ financials more transparent and other “reforms”. However, these “reforms” did nothing to prevent the 2007-9 meltdown where major companies went from financially sound and a clean audit opinion to utterly bankrupt in a matter of months, often for opaque balance sheet related items that were conceptually similar to the Enron-esque accounting items that Sar-box supposedly fixed. And as far as the BP spill; government employees by the thousand supposedly had oversight of that sort of behavior and yet were in fact ineffective in preventing the events in the gulf. The SEC did nothing to catch or track Madoff despite many warnings due to institutional bias and failure; even now they are trying to catch up to Wall Street, despite having a huge budget and thousands of staffers. 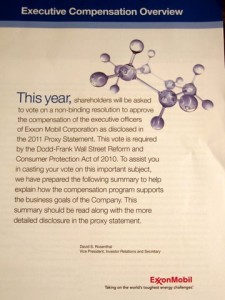 I recently received this summary of Exxon’s compensation policies since I am a shareholder. While Exxon is universally maligned among the left in fact their behavior is completely optimal as far as incentives for executives, and transparent. From the document:

The compensation program supports the retention of these and all other executives by holding back and putting at risk a large percentage of annual compensation until retirement and later.

Other practices include 1) no employment contracts 2) no payments or benefits are triggered by a change in control 3) no severance programs. In addition all of their US executives participate in the same programs so that they are aligned.

The government, on the other hand, despises transparency and accountability, along with their related organizations. The Chicago Tribune had an excellent article titled “Stimulus funds wasted in national home weatherizing program, critics say“. The article discusses one of the many “stimulus projects” that the government created as part of the massive effort to prop up the economy; all taxpayers will be paying for this for years to come in the form of repayment on our Federal debt.

The money spent… is a tiny fraction of the $90.5 million federal and state officials are pouring into the nonprofit CEDA to weatherize homes for the poor, but hundreds of jobs have been plagued by workmanship problems, according to state and federal records. As CEDA’s part in the federal stimulus program heads into its final months, contractors continue to fail 1 in 7 inspections, and a federal plan to fix mistakes revealed in a blistering audit last year still hasn’t been completed, federal officials said.

And not only is the program not working as intended, the government and their partners in the non-profit sector (that sprang up to eat at the trough of the stimulus funds) is extremely reticent to provide information to the journalists at the Chicago Tribune, which seems at odds with their public mission (although predictable to anyone that has a basic understanding of how governments actually function).

And by the state doling out money to a nonprofit, which is not subject to open-records laws, officials have kept from the public how millions of taxpayer dollars are spent. CEDA refused to provide information about its contractors, some of which have lengthy records of complaints, the Tribune found.

As the government moves into a larger sector of the economy, paid for with taxes taking from businesses in the private sector and their employees, you should expect grudging transparency at best, muted and confusing responses when problems occur, and no accountability among government officials for failures and outright lies. For instance no one would be fired related to the mis-management of this program, for example.

We need for people to understand how the “dead hand” of bureaucrats will strangle the country and that problems and denials should be expected as the norm and not an exception when these sorts of programs run amok.

5 thoughts on “Transparency and the Public Sector”