Dancing in the Glory of Monsters

The “World War in Africa” occurred in the Democratic Republic of the Congo (DRC). The first Congo war occurred in 1996-7 when the deranged Seko was taken out of power by the elder Kabila backed by Rwandan troops following their victories against the Hutus that perpetrated the Rwandan genocide. The second Congo war occurred in 1998-2003 as the Rwandans and Ugandans attacked again and many other nations intervened; the elder Kabila was assassinated and replaced by his son as leader of the DRC.

Ultimately elections were held in 2006 and Kabila won the election, based on his popularity in the Eastern part of the country (nearer Rwanda) for orchestrating the peace accord, while Bemba was popular in the West of the country nearer the capital Kinshasa. Bemba lost to Kabila in a run-off election for President and went into exile in the West; Bemba is now standing trial in the ICC.

Another confusing element of the conflict is the fact that Uganda and Rwanda, who were allies in the East against the DRC and its backers, had a fall out and started battling each other over the mineral riches in the areas they controlled. They had a cease fire but then one of the Tutsi leaders formerly part of the Rwandan-led Congolese Tutsis named Nkunda took a major role; in another odd turn the DRC allied with the official army of Rwanda and they both attacked Nkunda (Rwanda was also attacking Hutu militias on its border with the DRC) and Rwanda is now holding Nkunda prisoner (Nkunda is wanted by the ICC).

In addition to all these ongoing military events, it must be remembered that the DRC is VERY WEALTHY with regards to commodities. Per wikipedia:

the Democratic Republic of Congo is widely considered to be the richest country in the world regarding natural resources; its untapped deposits of raw minerals are estimated to be worth in excess of US$ 24 trillion

The Chinese are attempting to invest in the country, bringing construction capabilities and investment funds in exchange for access to DRC resources. This article is a NY Times interview with Kabila about the Chinese investment. On the one hand, China is willing to work with corrupt governments and do what it takes to get the deal (presumably including bribes, but this is never proven); Western countries are barred by their own laws (for the most part) from doing this type of contracting. On the other hand, the Chinese are actually intending to build infrastructure, rather than shower money on corrupt politicians, and this infrastructure would be tangible and in the words of the locals “you can’t put a railway in a Swiss bank account”.

In the light of the importance of these events to the world in terms of scale (the most deaths in an armed conflict since WW2, if you believe the unverifiable figures), I try to learn what I can from whatever sources are available, including the excellent book by Prunier

(which I review here). Thus with this background I am bringing you my review of Dancing in the Glory of Monsters: The Collapse of the Congo and the Great War of Africa

by Jason Stearns (here is his blog which is also full of interesting information). 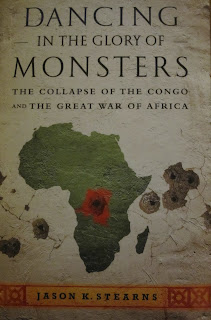 The book attempts to “personalize” many of the characters involved and the author goes and visits many of the survivors to interview them. It cannot be overstated how difficult this can be; not only is the DRC almost impossible to travel in (except by air) many or most people do not wish to talk about these wars and being seen with a white journalist is a tell-tale sign of speaking up.

The book is excellent and highly recommended if you wish to learn about this large-scale conflict. Rather than summarize the whole book I am going to highlight some of the passages that I found most interesting.

I was very interested in the descriptions of how child-soldiers were recruited and trained. These child-soldiers not only played an important part in the war, they also were involved in the assassination of the elder Kabila, a critical element in the 2nd Congo war (in fact the element that allowed for peace to ultimately come, of sorts, since Kabila was busy antagonizing his allies and the West). A recruit named “Kizito” described his “training” as such:

a hazing ceremony that consisted of three days of grueling exercises on the training pitch… the soldiers would descend on them and begin beating them… if you couldn’t keep up with the strict regimen, you were punished.

At the end of the three days the Rwandan Tutsis training them brought out six prisoners who had attempted to desert. After the officers killed 3 the recruits slit the throats of the other three. Now they were called “soldiers”. The training continued for four more months, with more traditional military tactics. Note that the Rwandans were some of the most successful soldiers in history when you compare their difficult circumstances and small numbers to their military victories, so they were passing on real training. Then he reported to a truck with the word “Bukavu” on the side and given one AK47 and a clip of ammo, their entire weaponry. Per the book:

combat that soldiers engaged in was guerrilla warfare, involving risky ambushes and close-quarter fighting with the enemy… if you wanted to hit the enemy, you needed to be close enough to be effective with the AK-47… children were often the only soldiers who had the guts to engage in many of the operations, who actually obeyed orders, and whose sense of danger was not as developed as the older soldiers.

The former allies Uganda and Rwanda controlled most of the East until the end of the second war. These countries came to blows and had battles in Kisangani, formerly called Stanleyville, relatively located in the center of the DRC. The book sets the stage for the battles:

Kisangani became the graveyard of Rwandan and Ugandan reputations, where the two countries’ lofty rhetoric gave way to another, more tawdry reality. Since the beginning of the first Congo war in 1996, the two countries had been able to maintain the pretense that they were involved in the Congo out of domestic security concerns… then in 1999 and 2000, the alliance between Rwanda and Uganda fell apart, as the two countries fought three battles in the streets of Kisangani.

The town was split between the Uganda and Rwandan forces, with local shops buying diamonds from miners and paying off the respective military forces for protection. Per the book it was up to $20M / month in uncut stones.

The Ugandans had tanks, artillery and other heavy weapons. The Rwandans were lightly armed but hardened from their guerrilla victories. Per the book:

The Rwandans were better organized than their enemies. They were motivated and following orders. The Ugandans didn’t seem to know why they were fighting… The Rwandans, used to years of guerrilla warfare, fought their way from house to house with their AK-47’s, dodging bullets. After battles, the Rwandans would always make sure to gather their dead and bury them, whereas the Ugandans often left their soldiers on the streets, leaving the impression that hundreds of Ugandans had died and almost no Rwandans. The Ugandans, for the most part, stayed in their trenches and in their armored personnel carriers.

If you are interested in Kisangani here is the site of the US Embassy located there and here is the Google maps site where you can drill down into the city from space.

In the genocide in Rwanda the Hutus slaughtered Tutsi.  After the Tutsis re-captured Rwanda, they struck out at the Hutus that fled into the DRC near Rwanda and chased the civilians and soldiers mixed together.  The author interviewed a man named “Papy” who would “interrogate and kill” the refugees.

“We could do over a hundred a day,” Papy told me.  I had a hard time believing him; it seemed so outrageous.  “We used ropes, it was the fastest way and we didn’t spill blood.  Two of us would place a guy on the ground, wrap a rope around his neck once, then pull hard.”  It would break the victim’s windpipe and then strangle him to death… I asked Papy why he did it.  It was an order, he replied.

There are many other atrocities throughout the book, of all kinds, repeating themselves in the wake of the Rwandan genocide.  In Rwanda the re-conquering Tutsis did attempt to bring (Hutu) killers to a sort of justice, but in the DRC there is little in the way of formal justice, other than Bemba being in the ICC dock and Nkunda in the hands of the Rwandans (and this is more of a falling out among former allies than any sort of true, formal judgement).  The author points out how difficult it will be to reconcile while this is the case.

Lack of Knowledge of the Conflict

Sadly, by dint of reading this book and Prunier’s book and trying to read through the web for additional information, I am likely one of the most knowledgeable people I know on these relatively significant historical events.  I would recommend reading both these books as well as checking out the blog of the author if you, too, are interested in this topic, as well.

Not to tie such events to our pop ephemera but it is jarring that our news and popular TV shows are filled with discussions of vampires and magic and procedural crime shows but hardly a peep about the humanity on display (or lack therof) and the complex military battles that occurred in the DRC and on its borders.  It is safe to say that once the Rwandan genocide was played across the world’s consciousness that the DRC faded away, even though this war claimed millions of lives, mostly through neglect, disease, disruption, and starvation, as well as out and out murder of the sort listed above.