California faces intense budget challenges. The budget gap is approximately $10 billion, and instead of “fixing” them, their budget has optimistic assumptions such as extra revenue due to an improving economy and many other sleight-of-hand items. The California executive and legislative branches are all solidly in the hands of Democrats, who control the agenda but must at least negotiate with the Republicans on the topic of tax increases (because a super-majority is needed to raise taxes).

I wrote here about how the State of California has a super-aggressive (and expensive) plan to move to “alternative energy” even though the cost / unit is much higher than traditional forms of energy, especially when transmission is taken into account.

In contrast with other states where the government is attempting to make their union workforce pay more for insurance and pensions, the completely captured Democratic officials don’t even attempt to reduce compensation, benefits or pensions.

Thus how does California intend to balance their budget, when they 1) won’t reduce government union worker pay or benefits 2) won’t back off their alternative energy zealotry?
By reducing medical care to the poorest citizens in their state. This article in today’s Chicago Tribune is titled “Health Law Model State Eyes Drastic Surgery” describes the situation in California’s medicare system which covers 6 million children and poorer residents. 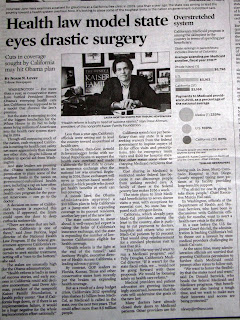 California spends less per beneficiary than any state. It is now seeking waivers from the federal government to impose copays of $5 for office visits and prescriptions, $50 for emergency room visits and $100 for hospital stays.. (they) would drop reimbursement for a standard physician visit to less than $12.

It actually is a bit worse than that. The co-pays would have to be collected by the doctors, and if they can’t collect the money, then their reimbursement will fall further.

And what would the likely impact be of these cuts? Per the article:

Many doctors have already closed their doors to Medicaid patients. Other providers are following suit.

It is telling that the Democratic-controlled executive and legislative branches have decided that protecting the salaries and benefits of their union workers has a higher priority than providing basic medical care for the poorest residents in their state. They also believe that an incremental (and insignificant) move towards alternative power, which costs billions, rises above the needs of the poor for medicine.

This is analogous to the teachers’ unions that put their needs and benefits ahead of the children, who suffer through some of the worst schools in the country here in Chicago.

I can only imagine the smug outpouring of punditry that would occur if the Republicans abandoned a core principle to the same degree that the Democrats in California are abandoning the poor in this instance. Like this article in the Chicago Tribune and LA Times, the fact that the Democrats are abandoning the poor and instead focusing on their own direct needs isn’t even mentioned, since it apparently isn’t a fact that they believe their readers need to know. The situation is presented as a sad part of the budget sideshow rather than as a calculating prioritization decision made on the part of California’s Democrats, which it actually is.