I recently took a trip to Norway. In addition to being interested in a debate about transmission lines strung high above picturesque fjords I was also astounded at how high their prices were (when converted into US dollars). 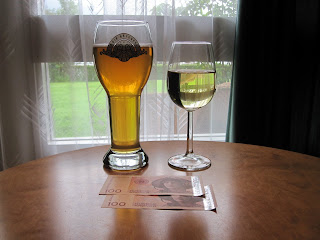 A drink at the crappiest, “dive-iest” bar in Bergen (Norway’s 2nd largest city) will set you back $11 USD. A drink at a regular restaurant or a hotel will frequently cost you much more. Above you can see one glass of wine and one beer (admittedly a good pour from a local brewer) and 200 Norwegian Kroner. At current exchange rates 200 Kroner is about $35-$40 (let’s say $40, because it makes the math easier and is close enough) or each Krone is worth 20 US cents. That means that these two drinks, with tip (if you leave one, optional) costs about $40. 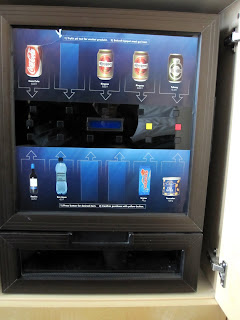 Here’s another sign of how upside down it is. I saw this cool mini-bar self dispensing fridge in a friend of ours’ hotel room. The prices in the mini-bar in a Hilton were competitive with those of a regular bar! I guess at some point you reach an absolute price ceiling on alcohol and the fact that a hotel mini-bar is competitive with outside prices means that you are there.

There are other factors at play with alcohol in particular; the government levies high taxes in order to deter consumption. The long arctic nights apparently encourage heavy drinking and if nothing else the government is compensated for your sins (it didn’t seem to do much to deter the locals from drinking, but it worked a bit for me). 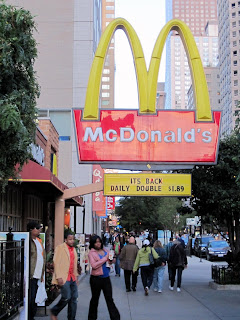 It isn’t just alcohol that is almost prohibitively expensive when you are paying with the US “peso” (or Euros – the Norwegian currency is punishingly high against everyone unless maybe you were paying in Swiss, Brazilian, Chinese, Canadian or Australian dollars). I split a “Deal Meal” in McDonalds with someone (it was 2 Quarter Pounders plus fries and one drink) because it too was around $20 USD when you did the conversion (I think it was 125 Kroner). Let’s compare that with the US… 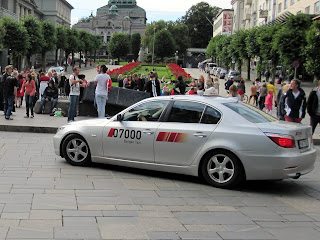 There are other odd indications of a currency upside down, or where the local economy has become so un-moored from the rest of the world that things are just “different”. Why not drive a 5 series BMW AS A CAB? I think our trip from the airport to downtown Bergen was something like 700 Kroner… I guess that is about $140 USD or so (we took the bus back when we returned, we can learn). So at that rate you might as well drive a 5 series BMW, which must be brought in country at a prohibitively high exchange rate, as well.

One thing about America; apparently it is very cheap to 1) get drunk 2) buy tons of unhealthy food 3) take a cab. I had a great time in Norway by the way it was a beautiful and exceedingly well-run country with a highly educated workforce. I still don’t know how they can pay the bills, though, unless local salaries are completely outrageous.