I have been interested in radio and music in general for many years. I wrote about the “squeezebox” internet radio here which I highly recommend. 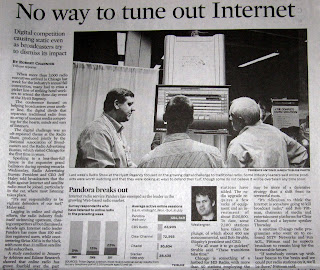 In the September 18, 2011 Chicago Tribune they had an article titled “No way to tune out internet” with the tagline “digital competition causing static even as broadcasters try to dismiss its impact”.

The article covers a radio broadcaster convention that met in Chicago and the comments of the radio executives on the state of their industry.

Radio Advertising Bureau President and CEO Jeff Haley told broadcasters that the fight against Internet and satellite radio must be joined, particularly in the car, where most listening takes place… lagging in online and digital efforts, the radio industry finds itself swimming upstream, chasing competitors all but dismissed a decade ago. Pandora has more than 100 million registered users, while once-teetering Sirius XM is in the black, with more than 21 million satellite subscribers.

In addition to being challenged in aggregate by online radio and satellite radio, over-the-air radio is also losing amongst the young.

The article discussed generally how HD radio had failed to catch on and was mostly a novelty. I wrote about HD radio here when I purchased one back in 2009 and I thought it might be a chance for radio to step up and compete with commercial-free channels full of interesting music and a much better sound. Unfortunately the second free HD stations weren’t that compelling and after a while I just gave up on HD radio altogether and gave away my radio for a friend to use as an iPod charger and / or player (the speaker sounded good, so it was a shame to throw it out).

Amongst all the competition radio touted their “scale”.

And some of the smaller radio owners touted their ties to their local cities.

We’re connected to our local community, and a box just isn’t, regardless of what you can Pandora or a satellite. Radio is a lot more than music.

Absolutely true. Radio is a lot about sports, especially football and baseball. Which is why you can listen to those games on XM / Sirius (and the score shows up, which is pretty cool) as well as through the online stations, too. Dan and I caught the Illini game up in Madison on satellite radio, when you probably couldn’t have gotten it from a terrestrial station up there.

In Chicago, the terrestrial situation for radio is pretty dire. Until I got a car with satellite radio built in (and an iPod jack), I had to listen to “regular” radio when I was in the car and all Chicago has to offer is WXRT, a progressive rock station which is pretty ancient nowadays, the Loop which is more classic rock, and Q101 the Alternative rock station which has been sliding downhill and recently went off the air entirely, replaced by a talk radio format. There is literally no good music radio station in Chicago which is astonishing, but drive on through and you will come to the same conclusion. If you like talk radio I used to listen to Howard St*rn (don’t want the traffic) before he went to satellite, and then there was Steve Dahl, who is now an innovator and has a “paid podcast” with no commercials. Everyone is gone from Chicago radio now.

Not mentioned in the article is what really put a spike in over-the-air radio… the fact that all the content became sanitized and the same from city to city. Little new music is breaking over the radio, and you get the same formats where ever you go. While this brought economies of scale to the companies that “rolled up” the stations in each town, it also killed any innovation or risk-taking. Their focus on their own profits didn’t allow them to sign people like St*rn, and young people are voting with their ears and just tuning out entirely. Do you ever hear about anyone talking about something on the radio, or what some DJ or commenter said? Now that action is on the internet or on TV.

Satellite radio and Pandora also offer far more choices than any over-the-air station; there are dozens of niche channels on XM – for rock there are even lots of gradations of “metal” from new metal (liquid metal) to hair bands to “the boneyard” which I get a laugh out of, especially their tagline “for road-trippin’ and binge drinkin'”. Interestingly enough, while Lithium is a “static” view of 90’s grunge “the boneyard” brings in “new” bands like Chickenfoot or anything a classic metal band does today.

As far as commercials, they drive everyone I know crazy. You can’t escape them in baseball or football, when there is no action, but other than that, once you have commercial free radio or an iPod you just can’t go back for an extended period. That’s just my experience, but I’d guess it is relatively universal, despite what any surveys say.

The funny thing is that nothing is stopping radio from risk-taking and putting on new music and artists except that they are all already in cookie-cutter formats that are locked-in. This is the least risky path in the short term, but in the end it is a road to nowhere. Try Pandora and start letting it “follow” your choices by putting in your favorite songs and artists and then by giving songs a “thumbs up” or down which allows them to narrow the casting even further. It is very difficult to go back to the same old crap on terrestrial radio after hearing the variety available on the satellite or pandora alternatives.

Maybe in other cities there is more competition but if you are trapped listening to terrestrial radio in Chicago it is a miserable experience. Nothing but sports for me if I am on the way or coming back from a game. Else it is brutal.

8 thoughts on “Terrestrial Radio and the Death of Innovation”