I know a lot of people who rent and recently overheard how difficult it is to find an apartment. This is anecdotal but they said that you needed to sign a multi-year lease and / or offer MORE than the requested rent to guarantee that you get one as soon as it is open.

The New York Times today had an article titled “The Lease is up, and now so is the Rent” describing the situation in New York City:

Across New York, rents have not only rebounded from the depths of two years ago, but are also surpassing the record high of 2007 during the real estate boom, according to figures from Citi Habitats, a large rental brokerage, and other surveys. That means a perennially frustrating process has become almost frenzied. Brokers say prospective renters need to come prepared to close a deal on the same day — ready to write a check for thousands of dollars to cover the first and last month’s rent, and the broker’s fee. For desirable apartments, forget about open houses — the best places are snapped up within a few days, or less, through private showings by brokers.

In the comments section on that post they mention what the article (typically) fails to do; New York’s problems are exacerbated by their ludicrous rent-control laws, which distorts developers’ behavior and forces some renters to subsidize their neighbors and creates a “shadow economy” of sublets. 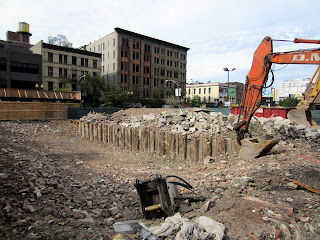 In Chicago it is (comparatively) easy to build new rental stock to take advantage of the situation; in my River North area there are giant new rental only buildings going up everywhere. At this site where a bank used to be there is another hole for a 20+ story apartment building at 501 N Clark.

I remember back in an economics class in college a professor discussed the real estate boom in Arizona in the ’80s… he said that since the builders were all small, they didn’t know when to exit the market. Individually they weren’t large enough to have market intelligence (such as in an industry with a few large players, like chemicals) so they just kept overbuilding and doubling-down their chips until they were wiped out. Only a few were smart enough to take their cards off the table rather than try to chase the last win, only to fall short and get caught when the market tanked.

It will be interesting to see who will take the brunt of the collapse in the higher-end rental market that is likely to occur in a few years. Someone is financing these rental projects; while they are not as subject to failing as a similar condo project (since sales are binary while you can adjust rents in a falling economy) they are still risky and require lots of up front debt financing as well as being hostage to rising real estate taxes (especially in Chicago, where we are in dire financial straits). A lot of the banks that funded the condo buildings went under and were taken down by the FDIC; perhaps the banks that are financing these new buildings will take the brunt, too.

As these buildings get constructed downtown, expect the more marginal rental units in the outskirts to take a big hit later when the number of renters falters. I anticipate that the big buildings would cut rents rather than remain empty (since it is essentially a fixed-cost operation, like an airplane, so getting any tenant is better than letting it sit vacant), and then they would prove to be tough competition for the less-modern rental buildings. Watch and see it all unfold.

12 thoughts on “The Next Bubble”