(A repost from the archives of the Daily Brief, for today) 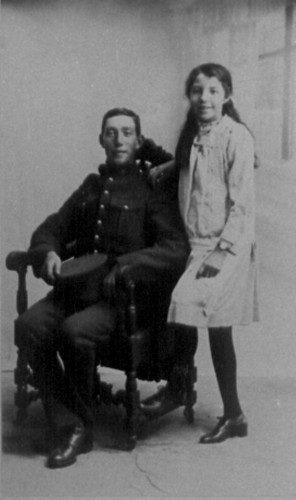 It is a sad distinction, to be the first in three generations to visit France while on active duty in the service of your country, and to be the first to actually live to tell the tale of it. For many Europeans, and subjects of the British Empire— especially those of a certain age, it is not at all uncommon to have lost a father or an uncle in World War Two, and a grandfather or great-uncle in World War One. It’s a rarer thing to have happened to an American family, perhaps one whose immigration between the old country and the new allowed for inadvertent participation, or a family who routinely choose the military as a career, generation after generation. Ours is but lately and only in a small way one of the latter, being instead brought in for a couple of years by a taste for adventure or a wartime draft.

When JP and Pippy and I were growing up, the memory of Mom’s brother, Jimmy-Junior was still a presence. His picture was in Granny Jessie’s living room, and he was frequently spoken of by Mom, and Granny Jessie, and sometimes by those neighbors and congregants at Trinity Church who remembered him best. JP, who had the same first name, was most particularly supposed to be like him. He was a presence, but a fairly benign one, brushed with the highlights of adventure and loss, buried far away in St. Avold, in France, after his B-17 fell out of the skies in 1943.

Our Great-Uncle Will, the other wartime loss in the family was hardly ever mentioned. We were only vaguely aware that Grandpa Al and Great-Aunt Nan had even had an older half-brother –  a half-sister, too, if it came to that. Great-Grandpa George had been a widower with children when he married Grandpa Al and Great-Aunt Nan’s mother. The older sister had gone off as a governess around the last of the century before, and everyone else had emigrated to Canada or America. I think it rather careless of us to have misplaced a great-aunt, not when all the other elders managed to keep very good track of each other across two continents and three countries, and have no idea of where the governess eventually gravitated to, or if she ever married.

“She went to Switzerland, I think,” Said Great Aunt Nan. “But Will— he loved Mother very much. He jumped off the troop train when it passed near Reading, and went AWOL to came home and see us again, when the Princess Pats came over from Canada.”  She sighed, reminiscently. We were all of us in the Plymouth, heading up to Camarillo for dinner with Grandpa Al and Granny Dodie — for some reason; we had Great-Aunt Nan in the back seat with us. I am not, at this date, very certain about when this conversation would have taken place, only that we were in the car — Mom and Dad in front, Nan and I in the back seat, with Pippy between us, and JP in the very back of the station wagon. Perhaps I held Sander on my lap, or more likely between Nan and I, with Pippy in the way-back with JP. Outside the car windows on either side of the highway, the rounded California hills swept past, upholstered with dry yellow grass crisped by the summer heat, and dotted here and there with dark green live oaks. I can’t remember what had been said, or what had brought Great Aunt Nan to suddenly begin talking, about her half-brother who had vanished in the mud of no-man’s land a half century before, only that we all listened, enthralled — even Dad as he drove.

“He fairly picked Mother up,” Nan said, fondly, “She was so tiny, and he was tall and strong. He had been out in Alberta, working as a lumberjack on the Peace River in the Mackenzie District.” She recited the names as if she were repeating something she had learned by heart a long time ago. “When the war began, he and one of his friends built a raft, and floated hundreds of miles down the river, to enlist.”

(William Hayden, enlisted on October 13, 1914 in the town of Port Arthur. His age was listed as 22, complexion fair with brown hair and brown eyes— which must have come from his birth mother, as Al and Nan had blue eyes and light hair. He was 6′, in excellent health and his profession listed as laborer, but his signatures on the enlistment document were in excellent penmanship)

“He didn’t get into so very much trouble, when he walked into camp the next day,” said Nan, “Mother and I were so glad to see him – he walked into the house, just like that. And he wrote, he always wrote, once the Princess Pats went to France and were in the line. He picked flowers in the no-mans’-land between the trenches, and pressed them into his letters to send to us.”

(There is only one family picture of William, old-fashioned formal studio portrait of him and Nan; he sits stiffly in a straight ornate chair, holding his uniform cover in his lap, a big young man in a military tunic with a high collar, while a 12 or 13 year old Nan in a white dress leans against the arm of the chair. She has a heart-shaped face with delicate bones; William’s features are heavy, with a prominent jaw— he does not look terribly intelligent, and there isn’t any family resemblance to Nan, or any of the rest of us.)

“His Captain came to see us, after he was killed,” said Nan, “Will was a Corporal, by that time –  poor man, he was the only one of their officers to survive, and he had but one arm and one eye. He thought the world of Will. He told us that one night, Will took five men, and went out into no-mans’-land to cut wire and eavesdrop on the German trenches, but the Germans put down a barrage into the sector where they were supposed to have gone, and they just never came back. Nothing was ever found.”

No, of course— nothing would have ever been found, not a scrap of the men, or any of their gear, not in the shell-churned hell between the trenches on the Somme in July of 1916. And the loss of Great-Uncle William and his handful of men were a small footnote after the horrendous losses on the first day of July. In a single day, the British forces sustained 19,000 killed, 2,000 missing, 50,000 wounded. Wrote the poet Wilfred Owen:

“What passing-bells for these who die as cattle?
Only the monstrous anger of the guns.
Only the stuttering rifles’ rapid rattle
Can patter out their hasty orisons.
No mockeries for them; no prayers nor bells,
Nor any voice of mourning save the choirs,–
The shrill, demented choirs of wailing shells…”)

And that war continued for another two years, all but decimating a generation of British, French, German and Russian males. Such violence was inflicted on the land that live munitions are still being found, 80 years later, and bodies of the missing, as well. The nations who participated most in the war sustained a such a near-mortal blow, suffered such trauma that the Armistice in 1918 only succeeded in putting a lid on the ensuing national resentments for another twenty years. But everyone was glad of it, on the day when the guns finally fell silent, on 11:00 o’clock of a morning, on the eleventh day of the eleventh month.

“Amazing,” Mom remarked later, “I wonder what brought that on— she talked more about him in ten minutes than I had ever heard in 20 years.”
I went back a few years ago, looking for Uncle Jimmy’s combat crew, and found them, too, but even then it was too late to look for anyone who had served with Great-Uncle Will – although any time after 1916 may have been too late. But there is a Canadian military archive, with his service records in it, and I may send away for them, to replace what little we had before the fire. But they will only confirm what we found out, when Great-Aunt Nan told us all about the brother she loved.

(added –  a link  to haunting photographs of WWI battlefields today. Cross-posted at Chicago-Boyz, and at my Celia Hayes Blog.)