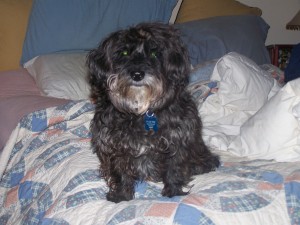 We live in a fairly OK suburban neighborhood on the north-east side of town – working class to middle-class, well-kept small house, with lots of military and retired military, being convenient to Randolph AFB, Fort Sam Houston and Brooke Army Medical Center; mostly owners and not many rental units. A solid, but not upscale neighborhood, which we know very well through having lived in and taken a lively interest in since I bought a house in 1995. We walk the dogs, and even before we had dogs, I used to jog a course taking me through most of the streets – it’s an OK neighborhood and we know it well. And San Antonio and Texas generally is doing all right, employment-wise, in comparison to many other places, but even so, I am developing my own way of following the current economic picture; the numbers of disposable pets.

Up until about a year and a half ago, when we found a loose dog in the neighborhood, the animal invariably turned out to be a strayed pet, and their owners were usually frantic to get them returned. Two of the largest dogs that we found and returned to their owners turned out to have strayed a good distance; several miles and from the other side of a busy four-lane avenue, but small dogs usually haven’t gone very far, not more than a couple of blocks from their starting point. We had it down to a science; if they were tagged and/or chipped, we would usually have to wait until Monday to call the veterinary practice and get them to look at their rabies shot register and give us the owner’s phone number. Or the owner had put up posters all over the neighborhood, or even thought to put their phone number on the dog’s collar, or registered them with some kind of pet retrieval service. Sometimes, it would be a matter of just putting a stray on a leash and walking around, asking anyone if they recognized the dog. On one particularly memorable weekend, we found and returned four dogs to their owners – I was at a point where I was afraid to step out of the house, for fear that I would find yet another one. It usually wasn’t a bother to keep a stray for a day or so; they were almost always house-trained, friendly, and amiable towards our own dogs and cats, older animals showing evidence of having been groomed and cared for … but in the last year and a half, this has changed in a bad way.

The dogs that we have found in the streets lately have all been dumped here by their previous owners – no collars, no chips and no tags, no one advertising their loss, and certainly no one recognizes them. Most of these dogs were young, almost always dirty and rambunctious. It was easy to work out the story arc there: someone got a cute puppy, it grew up and grew large, became a handful. Someone solved their problem by driving into our neighborhood and making their problem someone else’s problem; a distressing circumstance, but kind of understandable. We dealt with two incidents of this in the last year; the first time by finding a new owner, the second time by reluctantly contacting the city animal shelter. The local city shelters will do their best to place healthy, uninjured and amiable animals, so we were not unutterably depressed in having to do this. What is most depressing of all, is that the last few dogs that we or our neighbors have rescued from the street were not the very large, young, untrained and un-housebroken kind. They were all small, affectionate, older and well-behaved; one was a Chihuahua/min-pin mix, and the other two appeared to be Maltese-poodle mixes, not one of them more than fifteen pounds, and all three bearing the evidence of having been otherwise well-cared for. The first of these had also been neutered, tail docked, fairly well clipped and with beautiful manners – we thought for sure that he was a pet, and would be searched for by his owner … but no. He had been dumped as well: no one recognized him, there were no posters or notices up, as appear when a well-loved pet goes missing. The only way we can square this, is to think that perhaps his owner died or was incapacitated, and whoever was sorting out their household couldn’t be bothered to take him to the shelter. We’ve come to a bad place, when pets are being dumped like this. And if it’s like this here … how bad is it in the cities where the economic pinch is really being felt?

(We’ve kept the well-mannered little dog, by the way. His name is Connor now, since we found him near O’Connor Road, and he is curled up in his dog-bed under my desk as I post this.)