Rolling Stone magazine compiles “top lists”. Their top lists used to be very bad; they seemed to solely represent the personal preferences of their editor. Recently the lists have gotten better as they use a “panel” of musicians and critics to select which is an improved system. And in any list, there is a lot of judgement, and should be a little fun. 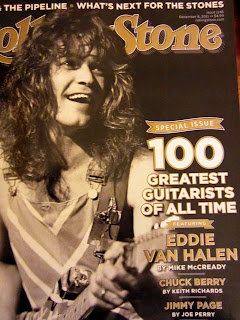 Even with these improvements, in my opinion, Rolling Stone botched the Top 100 Guitarist list. The list is far too tilted to the past; their #1 guitarist, Jimi Hendrix, DIED OVER FORTY YEARS AGO. Thus my methodology includes “relevance” in the calculation, and someone who died over forty years ago, correspondingly scores lower. I read through the list carefully, consulted outside sources, reviewed my own music, and built a “methodology” that resulted in my own list.

In reading through the list Rolling Stone and the musicians doing the evaluations obviously employed a lot of criteria. This isn’t the “most talented” list, or we’d be looking at Steve Vai and John Petrucci as #1 and #2, but they don’t make the Rolling Stone(nor mine)list at all. Rather than use a “subjective” evaluation criteria, I made my own up, and made it more explicit.

In the process you were either a “top 100” guitarist or you weren’t; then I started scoring the methodology on the top 100. Then I looked at the results and seemed if they made sense, and adjusted the scores accordingly.

Results of the Analysis:

As a result, the list I came up with is dramatically different than the Rolling Stone list, since it doesn’t just contain dead blues or rockabilly musicians and it weighs newer contributions higher than what happened 40+ years ago. 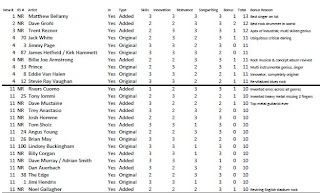 1. Matthew Bellamy, Muse – he is like Brian May and Freddie Mercury rolled into one. He is riding a pop culture wave with the vampire movies but on the other hand he is bringing heavy, guitar arena rock to the masses. Go see Muse in concert and see for yourself

2. Dave Grohl, Foo Fighters – another highly relevant guitarist his band the Foo Fighters are filling stadiums and bringing NEW guitar rock to another generation of fans. It’s been 20 years since Nevermind, time to move on

3. Trent Reznor, Nine Inch Nails – you need to work backwards from the monstrous guitar riffs on songs like “Head like a Hole”, “Closer” and “The Hand that Feeds” and remember who created them. On top of that he basically invented modern industrial rock and won a grammy for his film score, as well as having epic battles with his record company and being in the forefront of modernizing the music business (inadvertently)

4. Jack White – Colbert summed it up best on one of his shows when someone asked a rock critic what band he liked and the answer was “whatever band Jack White is in”. Also a genius in business and fashion like Reznor he too is keeping the guitar flame alive

5. Jimmy Page – not just a guitarist but an epic songwriter and performer

6. James Hetfield / Kirk Hammett, Metallica – been to a sporting event in the last decade? Chances are you are hearing their riffs which I find astounding since as a kid we waited for days to see them along with the scrubs of humanity and now they are one of the biggest bands in the world, with crossover success

7. Billie Joe Armstrong, Green Day – like Bellamy, Grohl and Reznor also off the RS 100 list, but his absence is even more of a head-scratcher considering that Green Day brought punk to the mainstream, breathed new life into the concept album, and spawned a highly successful musical, to boot

9. Eddie Van Halen – here for his originality, and the fact that he is still trying to be relevant. And also that his music is the “official drunk music of the Bears tailgate” although we argue whether VH I or II is the “true” Bears #1 album

10. Stevie Ray Vaughan – ripped apart blues rock from the moment he stepped on stage, his death after sobering up still one of the worst things to happen in rock and guitar music history

– Rivers Cuomo, Weezer – he is one of the few relevant songwriters today on the radio and doing collaborations that actually plays a damn guitar solo
– Tony Iommi, Black Sabbath – invented metal, missing 2 fingertips to boot
– Dave Mustaine, Megadeth – not only a great guitarist, gets bonus for being alive
– Trey Anastasio, Phish – while I am not a “jam band” fan the fact that he wasn’t on this list is criminal. The guy is astoundingly accomplished and his fans travel the world to see them
– Josh Homme, Queens of the Stone Age, others – a great guitarist and singer, leading one of the few hard rocking and musically and critically relevant bands around
– Tom Sholz, Boston – also an astounding omission by RS. Don’t they remember the 70’s? He defined guitar rock
– Angus Young, AC DC – ’nuff said
– Brian May, Queen – seminal riffs with Queen
– Lindsay Buckingham, Fleetwood Mac – cannot believe he was ranked #100 by RS. A producing, playing, songwriting genius who also defined the 70’s and much of the 80’s
– Billy Corgan, Smashing Pumpkins – singer / songwriter / scene stealer from the height of Chicago grunge. Another astounding RS omission
– Dave Murray / Adrian Smith, Iron Maiden – Who would have thought that Iron Maiden would be one of the biggest bands in the world in 2012? But they are. And much of that is owed to their twin guitar attack
– Dan Auerbach, Black Keys – one of the few bands on the rise with actual heavy, hooky guitar and cool aesthetic
– The Edge, U2 – responsible for their shimmering guitar sound that still packs them in on monster tours with new material of good quality
– Jimi Hendrix – here he is, 40+ years gone
– Noel Gallagher, Oasis – another astounding omission by RS, Oasis was the biggest band for a decade of guitar heavy rock