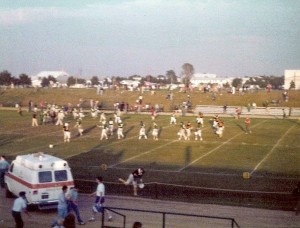 Misawa AB, late fall, 1977. If it were later in the year, the field would have been under about four feet of snow. I think I took this picture because some of the FEN-Misawa staff were playing. They would have been for one of the larger unit teams – FEN wasn’t large enough to field a team of our own.

1 thought on “Is there some kind of football event going on this afternoon?”