Today governments across the United States are facing budget shortfalls caused primarily by making promises in terms of pensions and benefits to workers that no longer are supportable. Recently I was in California and I saw this sign in a bathroom at a popular tourist attraction. 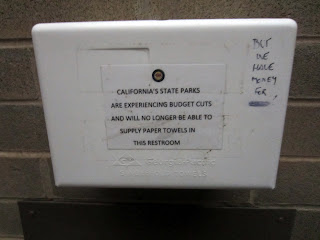 The key concept to understanding how we got into this predicament is the word “craven”. Here is the official definition per Webster:

Politicians lacked the courage to stand up to public sector workers, predominantly the unionized ones like teachers, firefighters, and policemen, because negotiating with them seemed to be all downside:

1) If they are angry, they can go on strike, disrupting schools, hospitals and essential public services
2) They are voters (predominantly Democratic) and represent a (mostly) unified voting block that is prepared to petition to achieve their goals in the media (which is usually sympathetic to their cause, since they are mostly Democratic, too)
3) Many of them (Police, Firefighters, and to some extent teachers) present sympathetic postures to the public; fighting with them is a no-win situation (even if you win, you lose)
4) Their army of retirees often are still local and also vocal and organized and prepared to demonstrate as well, although they are not in a position to block essential services

Thus the “craven” route was simply to capitulate – write up promises to TODAY’s government workers and RETIREES and then just “kick the can” into the future to the date when those promises came due. Today’s politicians won’t be there when the bills come due (Daley most famously sold off Chicago’s assets, signed long term unaffordable deals for labor peace, and walked off into the sunset) so this fits their short term strategy to a tee.

However, in the near term, I think that politicians’ inherent “craven” behavior will work in REVERSE, giving us an opportunity to tackle the root cause of the problem. How do I come to that (preliminary) conclusion?

It is simple – there are really only two solutions available for politicians today (in places like Illinois, California, and Detroit, where it is literally collapsing) and in the near term in more well run or well funded places:

1) Raise taxes AND cut services drastically to pay for union benefits and pensions
2) grab a hold of the problem, cut payments to today’s workers and retirees and cut their benefits and costs, thus leaving more dollars for services TODAY and the opportunity to AVOID tax increases

So let’s say that you are a politician running for office in a few years – what do you promise constituents?  You have to promise #2 – that you won’t cut services today and won’t raise taxes – or you won’t get elected.  I’d love to see people run for office on a platform of #1 and get elected – it won’t happen.  Now what will actually happen a lot is that politicians will promise #2 but do a variant of #1 to get elected (because it is VERY hard to take on the entrenched unions when you come into office) – but then the financials will collapse further and they will be FORCED into making a harder choice, or they will come up for re-election and be drummed out of office.

Soon the EASIER or “more” craven approach will just be to get elected on a basis of reducing government costs on the backs of existing workers and retirees and chopping compensation to avoid raising taxes or reducing services.  Thus the entire process that led to our current debacle will operate in reverse, with bad consequences and subsequent demonizing for government employees as the root case of the issue.

Government workers, especially unionized ones, will see many victories but a long term defeat on all these issues.  In the end sympathies won’t be enough to offset the crippling taxes and immense service cuts that are necessary to pay for past politician promises.  The politicians will side with the majority, who will have to reform the system, even though this reform will be rocky and filled with failures and vitriol.

Politically craven behavior, which dug this grave, will work in reverse.  This is a hope, at least.