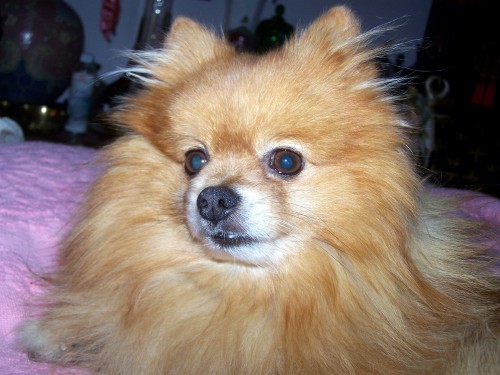 It has happened to us again; we came home from morning walkies on Thursday with an extra dog, to the bafflement and apparent disgust of the Lesser Weevil and Connor … who seem to be getting over it, even as I write. The current canine find is small, attractive, and relatively well-behaved and seems to be agreeable to cats. Which a dog in our house had damn-well better be … the cats outnumber the dogs, and are Superior Beings – at least, as the cats see it, and woe betide the canine which doesn’t acknowledge this superiority immediately.

We have done this quite often – arrived home with another dog. Usually we can locate an owner almost at once – either the original owner or someone who will step up to the plate and take said dog on. Now and again we have had to turn them over to the county animal shelter; a concern which is trying their damndest to re-house the amiable and healthy animals which are turned into their facility. This time we do have some hopes of locating the owner who is missing him. How many people in a short range of our neighborhood have managed to misplace what appears to the expert eye (of a breeder just a short way away) to be a young pure-bred male Pomeranian, of an appealing reddish coloring, an amiable personality, and agreeable to other cats and dogs. He (an unmistakably un-neutered he) was running around on one of the main streets through our neighborhood. It took a bit of effort to catch him, as they are fast-moving little b****rds. Two of our neighbors stopped and told us – as we were carrying him home – that they had tried to catch him, as he was merrily skipping about in the traffic along that main feeder avenue. We were the first to be successful, probably because he was curious about Weevil and Connor, so that after about three blocks of pursuit, feints and dodges, my daughter managed to scoop him up in her arms and carry him homewards – all eight pounds and some. Of which I think a pound or so is in the weight of his fur and about half a pound in the weight of his balls … un-neutered male, as I said.

He was gloriously filthy, having had a good couple of days of unsupervised freedom – long enough to ravel the fur on his nether quarters into unspeakably filthy knots, bedecked with a huge quantity of foxtails, stickers and other matter best left undescribed. We stopped and talked to a handful of neighbors – some of whom said they had seen him at large and from a distance, as a fast-moving ball of fluff – for about a week, which seems about right, although where he was getting food and water from is anyone’s guess. He was quite cooperative about being bathed and groomed – which is a huge necessity for the breed, and was enthusiastic about accepting a harness and leash and going for the usual walkies this morning. One curious note – he prefers women; doesn’t care for men at all, and now and again growls at me when I come into the house wearing the gimme baseball cap that I wear when working in the garden. So, I deduce a female owner, with other cats and dogs in the household. Dismayingly, though – there are no posters out for him, and nothing like him listed on any of the local lost-pet websites, and he can’t possibly have come very far. We’ve been told by people who know that that there are pets being abandoned right and left, even here in San Antonio, where things are pretty much OK. It does say something, though – that the abandoned dogs that we have found lately aren’t the overgrown, untrained young mutts that someone apparently picked up as a cute puppy and ditched when they turned out to be too much of a handful. Connor is a Maltese-poodle of some years, well-trained, amiable and socialized, previously well-taken care of, and the lost Pomeranian looks to be the same sort.

Oh, and if we don’t find his owner – which is starting to shape up that way – we’re going to keep him. Lord knows – he won’t eat much.

10 thoughts on “All Things Doggish”