In Chicago a new real estate boom is occurring. There are 3 large hotels and 2 major apartment skyscrapers being built in River North. 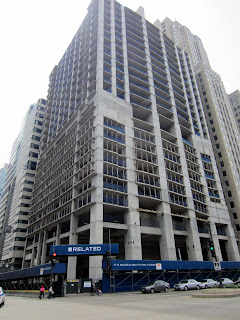 There is also some good news on the “abandoned building” front. At 111 W Wacker, there is an abandoned, partially finished skyscraper that was going to be an 80+ story condo / hotel. They recently changed the facade in the front of the building as you can see in the photo above and claim to be working on completing the building, sitting idle since the 2008 crash. According to this article, it is to become a 65 floor apartment building, apparently satisfying an insatiable demand for high end apartments in the city (also due to the fact that people were having trouble selling condominiums in this real estate market). We’ll see if it actually gets built but this is a good start nonetheless. I wonder if it hurts a building to sit out half-finished, exposed to the elements all winter, but apparently this isn’t stopping the new owner. Doesn’t seem like a good idea to me. 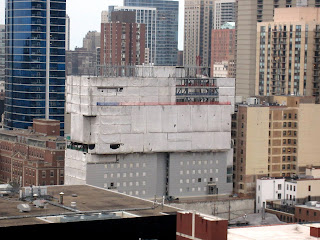 On the other hand, there is a Staybridge Suite building in River North that has been covered with some sort of strange tarp for years. If you go to this link you can see the odd shape that the building was supposed to have. I will believe that they finish this damn thing when I see actual construction, although they do keep the lights on at night. The f’d up part of this is that Staybridge is an actual company – I hope that this leads to some bad publicity or something for them, leaving a giant half built eyesore in the middle of Chicago. Hopefully they make some headway on this before the current mini real estate boom ends in dust and misery like the last one.

7 thoughts on “Abandoned Skyscrapers in Chicago”