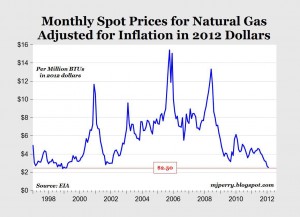 The hot energy story of the last few years has been the vast expansion in the available supplies of natural gas, and the very significant economic implications thereof. I though it might be interesting to take a look at the past, present, and future of this commodity.
The first known use of natural gas was by the Chinese, circa 500 BC…they captured gas from places where it was seeping to the surface, transported it in bamboo pipelines, and burned it for a heat source to distill seawater and capture the resulting salt and fresh water. The modern gas era began circa 1800 with the use of gas for lighting–initially of streets and later of homes and other buildings. Since there was no network of gas wells and long-distance pipelines, the gas used for these applications was usually not true natural gas, but rather “town gas,” made by heating coal. (Gas stoves seem to have become popular circa 1880, and apparently had quite an impact….I’ve read that the term “gas-stove wife” was enviously applied to women who were so fortunate as to have one of these appliances and were thereby spared the labor of tending a wood or coal stove, and hence had some leisure time available.)


The transition from coal gas to true natural gas had to wait on the build-out of a long-haul pipeline network, which took place mainly from 1920 to 1960. Although electricity became the glamor “fuel” and displaced gas in many cases for cooking and heating, the generation of electricity itself has in recent years become a major source of gas demand. Natural gas is also important as a feedstock for the production of fertilizer and of various plastics. By the early 2000s, there were serious concerns that the US was running out of natural gas–see for example this 2003 TIME Magazine story. The article cites Alan Greenspan’s concerns that high nat gas prices would make us uncompetitive in many industries, as well as citing direct economic pain inflicted on consumers. The only solution seemed to be large-scale imports of natural gas via LNG (liquified natural gas) ships. (Gas is far more difficult to transport than oil, because it needs to be liquified in order to make the volumes manageable, which in turn requires refrigerating it to very low temperatures.) In late 2005, US natural gas prices hit an inflation-adjusted level of almost $16 per million BTUs.


The price is now about $2.50 per million BTUs. What happened?

What happened was “fracking,” or hydraulic fracturing, which uses the injection of fluids under pressure to crack open rock formations and make accessible gas/oil which would otherwise be unavailable. Although fracking has been used for decades, the technology has been intensively developed in recent years, especially thru the efforts of independent oilman George Mitchell. (It’s interesting that Exxon-Mobil CEO Rex Tillerson was also involved in fracking experiments when he was a young geologist.) This video explains how fracking is enabled by three related technologies: horizontal drilling, microseismic mapping, and slickwater injection.


In his state-of-the-union address, Obama was quick to cite “public research dollars” involved in the development of fracking technologies (although he avoided actually using the term “fracking”)…it would have been nice if he’d had the grace to acknowledge the role played by entrepreneurs such as George Mitchell in this revolution rather than exclusively emphasizing the government role.


The expansion of natural gas supplies has many implications. It will help to hold down and even reduce electricity prices, and help the nation avoid Obama’s promise of electricity prices that would “necessarily skyrocket” as a result of his war on coal and on fossil fuels in general. These lower electricity prices will in turn help to make manufacturing more competitive, as will the availability of natural gas as a low-priced feedstock for chemicals and plastics production. See for example Plastics News:


Newfound supplies of natural gas from shale deposits throughout the (North American) region have altered the dynamics of polyethylene and other plastics that use ethylene as a feedstock. Natural gas can be used to make ethane, which is converted into ethylene and then into PE and other resins. Proved shale gas deposits in the U.S. alone jumped 75 percent between 2008 and 2009. The discoveries have prompted several firms — including Dow Chemical Co. and Shell Oil — to announce plans to build new North American ethylene crackers, with Shell making the almost-unheard-of decision to place its new cracker in western Pennsylvania, near the gas-rich Marcellus Shale. Other companies, including Chevron Phillips Chemical Co. LLC and Formosa Plastics Corp. USA, have announced plans to increase their North American PE output as a result of the shale gas wave. “It’s like the gold rush,” Dow executive Mauro Gregorio said of the shale boom in an interview at NPE2012, held April 1-5 in Orlando. “The discovery of shale gas is one of the most important events in the U.S. in a long time.

(via Carpe Diem, which has more on the gas revolution here.) Also see how unconventional gas fuels America’s manufacturing revival at the GE blog (although I have to note in passing that GE’s excessive hyping of wind/solar over the last several years has been less than helpful for the development of an intelligent national energy policy.) Low gas prices also encourage natural gas use in transportation: there is already considerable use of compressed gas for local vehicles such as delivery trucks and buses, and there are potential applications for LNG with long-haul trucking and even with rail. Indeed, the natural gas revolution has been one of the very few bright spots in the American economy over the last few years, and has the potential to contribute greatly to this country’s economic recovery and growth.


So what could go wrong?


It is possible that decline curves are being calculated incorrectly and that the fields now being developed could hold significantly less potential than believed by their developers and investors and that the economics will turn out to be terrible. It is possible that there will turn out to be genuine environmental problems which are so serious that they justify the shutting down or extreme restriction of advanced fracking technologies.


But I think the technology and the industry are well enough developed that these risks are fairly minimal.  The primary risk is political: that environmental extremists will do to natural gas what they did to nuclear power and will apply irrational fear-mongering to get fracking suppressed or tied up in enough regulatory knots to inhibit the fulfillment of its potential. This danger is certainly much, much higher if Barack Obama is reelected: the President, and the Democratic Party in general, have repeatedly demonstrated extreme hostility to the fossil-fuel industry (see for example this: the administration is killing even more energy jobs than we thought) and extreme obesiance to environmental pressure groups.  It should be obvious that if Obama had succeeded in establishing the degree of energy-industry control of which he dreams, the natural gas revolution never would have taken place. Regardless of how much credit Obama in his campaign speeches tries to take for increases in gas production, you can be very sure that a second Obama administration would involve a much more constrained role for natural gas than would a Romney administration–with very malign consequences for the entire national economy.


Disclosure: I ‘m an investor in many natural-gas-related enterprises.

8 thoughts on “Natural Gas: Past, Present, and Future”