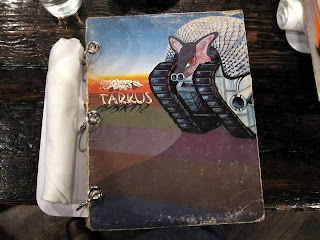 The local River North restaurant Rockit uses former album covers as binders for their menus.  I was surprised one day to see Tarkus by Emerson, Lake & Palmer.

While Tarkus would be an obscure album today (the average person who is familiar with classic rock might know “Lucky Man” and a couple other songs) it is hard to think that in 1971, when this album came out, it reached #1 on the billboard charts in the UK (and #9 in the US).  According to wikipedia, this album landed between “Sticky Fingers” by the Rolling Stones and “Bridge over Troubled Water” by Simon & Garfunkel.

To put this in context – “Sticky Fingers” was one of the run of 4 fantastic albums that put the Rolling Stones in the pantheon of rock – they were 1) Beggars Banquet 2) Let it Bleed 3) Sticky Fingers 4) Exile on Main Street.  And everyone knows Bridge over Troubled Water.

And yet Tarkus, and mostly Emerson, Lake & Palmer, is completely and utterly unknown.  Nowadays Tarkus would be viewed as a niche product, un-commercial for radio / MP3 singles but perhaps capturing a tiny but devoted market.  The song Tarkus takes up a whole side, and is over 20 minutes long, a series of sub-songs linked into one big song.  If you even thought about releasing a jazz / semi-metal / progressive rock album (CD) like this today you’d get laughed out of the record executive’s office (if they have offices anymore).

At least I was entertained seeing Tarkus as part of my lunch menu.  To think that one day long ago that this would be more than a minor trivia item, or a piece of kind of ugly artwork, is almost unthinkable.