Below is parade organizer Andy Thayer (the white guy on the right side). Conveniently for him a smiling photo of Chairman Mao is going right past him, he’d be proud. I’ve seen Mr. Thayer on the news (that’s how I recognized him) and at least he talks about non-violent protests a lot. 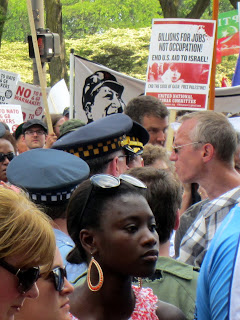 A little bit of humor – “Don’t Bomb Me, Bro” is a take on the “Don’t Tase Me, Bro” internet meme. Also check out the sign linking LBJ, Nixon, Bush & Obama. In general I didn’t see any of the traditional “Bush = Hitler” type signs nor did I see any particular anti-Republican signs. These protestors were mostly against everyone and they did not like Obama or the Dems, either. 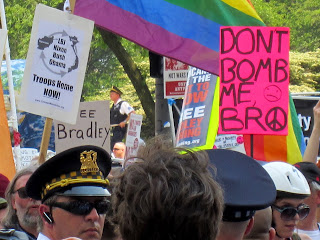 Look at this completely ridiculous sign of some sort of Iranian scientist with his child (probably an actor) saying stop the US and Israel from murdering Iranian scientists. The group pledges solidarity with Iran. There hardly is a less popular group than Iranian nuclear scientists but in the US it is his right to pledge allegiance to Iran, I guess. 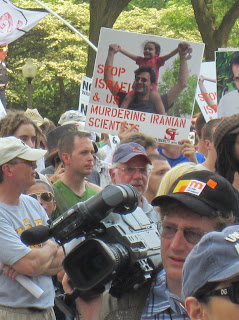 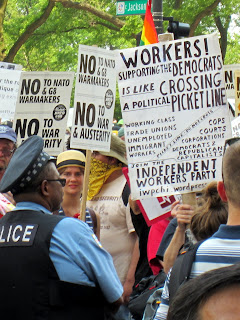 These 2 with the bandanas and the one with the Guy Fawkes mask backwards on his head are the ones that the authorities are keeping their eyes on as likely troublemakers. I would not bet against the police they are out in massive force and seem organized and with high morale. 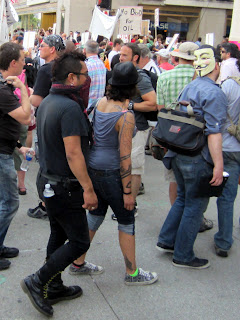 Just like in Madison you need to tax the rich and to help unions. They are out here marching with these looney tunes it can’t be helping their cause. 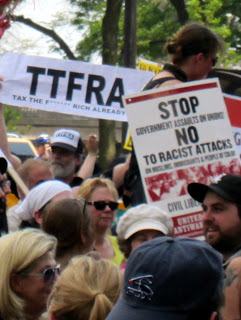 If you want to hear the erudite chants here is a movie… “This is f*cked up, this is f*cking bullsh*t”

And another movie of the communists marching… note the rise of the Hammer and Sickle. Another traditional group marching to represent the 99%, apparently.