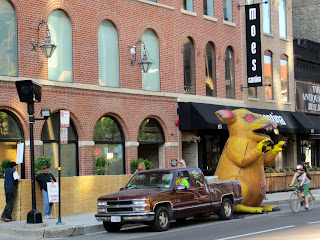 Seeing a giant rat outside your business isn’t exactly a red carpet for enterprises considering locating in the state of Illinois, especially while states right next door like Indiana are “right to work” states.

Caterpillar is currently locked in a strike with their workers at a plant in Joliet.

Roughly 800 union members walked out of the Caterpillar Inc. plant in Joliet on May 1, rejecting a proposed six-year contract that would freeze their wages, double health care premiums and eliminate pensions and seniority rights.

Caterpillar has been battling unions in Illinois for decades. Caterpillar is very familiar with how to operate during a strike and they have retirees and trained engineers, replacement workers, and individuals who crossed the picket line to run the plant. Caterpillar claims that output hasn’t been impacted by the strike. Caterpillar recently closed a Canada plant after workers refused to accept reduced pay and benefits and… moved those jobs to Indiana.

Employers are incredibly leery about adding jobs that might be unionized; while they are often leery of leaving behind assets and customers that are on the ground, new and incremental investment is another matter, entirely.

When you go to Michigan today you can see the beautiful homes and the world-class universities that were funded by the industrial powerhouse that used to be the auto industry. Today the growth in that industry all happens in the south, in non-union states. Someday those states too will have the long term wealth, since industry spawns an entire ecosystem that you can see running in reverse in the heavily unionized “blue” states.

Unions used to say that their members provided higher quality products than non-union workers; in Illinois the construction unions still tout these supposed advantages (not that there is evidence that construction quality is higher in Illinois than in the non-union south). Today, however, union arguments move more towards “fairness” and this is not a convincing argument – it might work with public employers that often shy away from a fight, but for companies like Caterpillar with global operations and global competitors they need to strike a hard bargain else their competitiveness will slip away to foreign competition.

7 thoughts on “Unions and Illinois”