The Chicago Teachers Union. Is there an organization more worthy of scorn and ridicule? Hard to say.

I will say this. Coming from someone who owns a business that is determined essential infrastructure, I have no sympathy for these illegal strikes.

When all of the teachers agree not to go to a grocery store, have their heating and air conditioning maintained, fly, or basically do anything not in their domicile, then we can talk.

Until then, all of us “essentials” who have been working through this thing from day one don’t really have any time for this temper tantrum.

I truly feel sorry for the parents of Chicago Public Schools kids who don’t know from day to day if their kids have school.

In the bigger picture, I feel sorry for those parents if they don’t have any choice but to send their kids to the Chicago Public Schools. But that is certainly grist for another post.

LTL means “less than load”. For those not in the know, a “load” means a full truck. Full trucks in the USA can be those huge 53 footers, or something smaller.

In industrial distribution for most products, we utilize LTL for the majority of our inventory. It’s a serious disaster right now.

I have been carping for the better part of a couple years about the issue. As with most things, there are several factors at play.

1) No new entries in the truck driving industry – we simply have a driver shortage, and have for a very long time. From what I am reading we are around eighty thousand short and the problem is only getting worse. All trades have this same issue. Kids growing up simply don’t want to do actual work, and would rather spend time making their money in front of screens or doing “soft labor” as I call it. Not that “soft labor” such as cutting hair or being an accountant are necessarily bad in and of themselves, mind you.

2) Nobody gives a f – this is harsh, but there it is. The work that is getting done, when it gets done in LTL is slow and sloppy. We have record amounts of damage and missing freight. It is absolutely maddening when you wait with these extended lead times for a specialized piece of equipment, and it finally arrives with a fork passed through the center.

3) I firmly believe that the cops, Teamsters and insurance companies have teamed up into a strange cabal to “slow roll” driverless vehicles. This is a bit of tinfoil had stuff I will admit but it is a theory I have had for a while. If we had driverless trucks a lot of these problems would be solved almost overnight, however there would be no speeding tickets to write, labor contracts to negotiate or premiums to collect. Well, virtually none anyways. This wouldn’t solve the issue of a lack of mechanics to service the vehicles, but that is grist for another post.

4) Lack of sense of urgency in government. As I have pounded the table on before, we need a “port team” or “transportation team” to get industry experts together, and start solving problems. Flying into LA and waving a magic wand over the ports, like has been done so far, is getting less than nothing done.

So the result is that we have this insane mess across the whole country. I have been trying to figure out ways to pick up freight that is within a reasonable range and trying other ideas such as even partnering with competitors or people outside of my industry to come up with a full truck to get a non stop delivery to the area.

A few anecdotal stories to end this rant.

I have a manufacturer that is 45 minutes from one of my stores. They sent out five pallets of stuff to me last Friday and it still isn’t here. The reason is that the trucking company has it parked at some sort of re-sorting facility as they lack drivers and need to consolidate their shipments. Meanwhile, people are getting cold.

This is an interesting article I spied the other day about a local chocolatier waiting forever for a skid of chocolate. I would bet a large amount of their extended lead time is transportation. It affects everything.

My daughter and I have a local writer friend who teaches at the elementary school level – a local quasi-magnet type school which advertises itself as offering a challenging college prep curriculum, and she is discouraged beyond words over how difficult it is to interest the pupils, especially the boys in her class in reading. Of course, given the run of books generated of late by mainstream establishment publishing, aimed at the YA and young readers and then approved by schoolteachers and librarians … most of them seem to be a grim wallow in social or familial dysfunction, misery, gloom, and despair … plus of late, lashings of sexual confusion as well – of the latter, it seems the more explicit, the better. 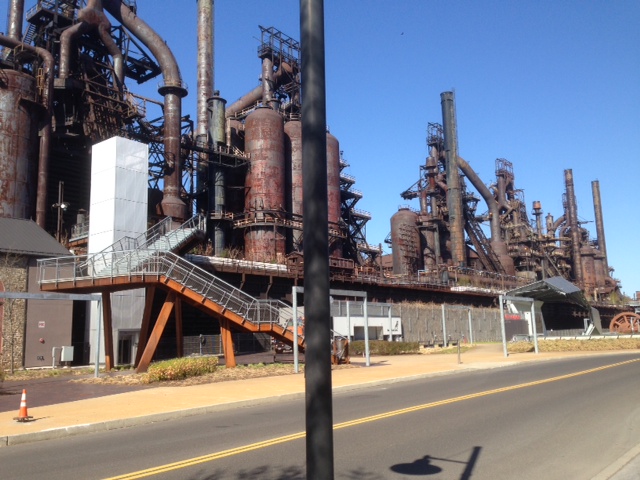 The National Museum of Industrial History is located on the site of the former Bethlehem Steel complex.  Most of the original buildings are derelict or partly torn-down, but the above array of blast furnaces and supporting equipment has been preserved.

Suggested musical accompaniment for a visit to the place that was Bethlehem Steel…features a different company and a slightly different geography, but basically the same sad story.

UAW Local 2865 (that’s UAW as in “United Auto Workers”) has voted to join the movement to boycott Israel.

So, what kind of work do the members of UAW Local 2865 do, would you imagine? Do they work the line in an auto assembly plant? Are they involved in making components such as brake shoes or camshafts? Do they pack and ship spare parts in a distribution center?