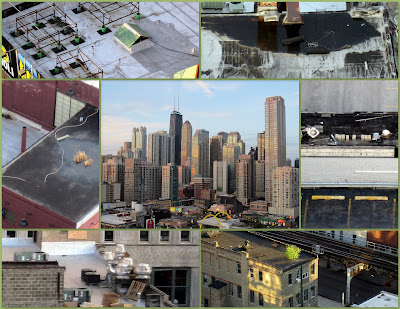 In the city they don’t built out they build up. When you first move into your condo you are amazed at the city view (if you have one). But then, after a while, you start to notice the details.

While buildings may lavish effort on their facades and interiors, often times they forget the roof. After all, who cares what the roof looks like. Your neighbors up above, that’s who. Those in the middle of the photo collage, to give a feeling for all the condos in the mostly beige and white skyscrapers look down onto the smaller (mostly commercial) buildings. In the loop it is businesses looking at businesses while in River North and the Gold Coast it is mainly condos and hotels looking down on commercial buildings.

Upper left – ever wonder how they hang signs and lights off the side of the building? In this case it is a series of planters filled with concrete in a grid. At least they are neat, I guess. Upper right – there has been a puddle with floating debris (including that rope and those boards) up on that roof for SEVEN YEARS. I can’t believe it doesn’t drive the people beneath them crazy with leaking but, rain or shine, in all seasons, there is a big pond on that roof (in the winter it does freeze). Middle left – there is grass growing (it is dead now) in the large puddle on that roof. Middle right – a roof is a great place to store your cinder blocks, un-needed antennas, and the like, apparently. Also been there almost a decade. Lower left – a bunch of boxes and cartons have been strewn about on that roof for a while. Lower right – of all the rooftops this is the most amazing. That is a fully grown tree (in the winter it sheds its leaves) on the roof of the old firehouse. I have no idea how it gets enough purchase to stay on that roof in the high winds but it has been up there for at least seven years, changing with the seasons. Kind of like those trees that live on the rock face in the wilderness.

Dan asked me over at LITGM why I used the word “purchase”… I was using it as a synonym for “grip” which I thought I heard somewhere but maybe I am just confused.