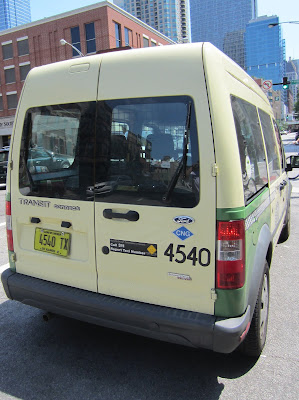 I recently took a cab ride in an unusual vehicle. I talked to the driver and he told me that it ran on compressed natural gas (CNG). You can see the blue CNG logo below the Ford logo on the right side. The driver said that the vehicle was assembled overseas in Turkey.

Per the driver – he filled up with approximately 8 “gallons” of CNG. This is measured as a “gasoline gallon equivalent” or GGE to try to provide an understandable metric for typical car owners. He said that this took him around 200 miles and cost around $2 per GGE. In Chicago terms this is probably about 1/2 the costs of what a gasoline powered truck would cost per mile (ignoring the higher acquisition costs of this custom SUV). This site shows the range of costs that customers are seeing per GGE. Per this site there are 6 CNG stations in Chicago with costs between $2 and $2.50 per GGE (costs are sometimes out of date by station and it is not always clear if prices are up to date). The driver also said that the power that the engine put out declined as it got emptier; I believe that this is different than how gasoline or diesel engines behave. The city of Chicago has a program to open CNG filling stations and subsidize cab companies to pay the extra up front costs of purchasing these customized vehicles.

Per this article in Reuters, the gap between the US rates and what foreign buyers (particularly Japan and Korea) are willing to pay is very significant.

The surge in gas output has made companies such as Chesapeake and Exxon Mobil’s XTO victims of their own success, unleashing a surplus of supply that could keep prices — and therefore profits — depressed for decades. For them, selling gas to Japan or Europe — which buys imported LNG at five or six times the domestic price of $2.50 per million British thermal units — is essential to continue expanding their U.S. business, creating jobs in the process. The shale gas boom is on track to support 1.5 million jobs across the United States by 2015, according to an industry-funded study by IHS Global Insight. Export licenses will make big winners out of some firms such as Cheniere, which last year secured the first and, so far, only export permit from the Energy Department.

Another element in the relative competitiveness of CNG vs traditionally powered vehicles is taxation. I am unaware of any specific taxes imposed on CNG when sold to fleets or vehicles as a retail product. For gasoline and diesel, however, taxes are imposed on each gallon. Per this source:

While it varies by state, it is safe to say that between 15% and 30% of the total cost of gas in “GGE” terms represents state and local taxes (depending on the price of gasoline, since some tax levies are “fixed” and some are a portion of the retail price). Thus if CNG prices “at the pump” are not taxed at a similar rate, this will provide a comparative advantage to CNG vehicles. Correction – there is a Federal excise tax on CNG approximately equal to that on gas or diesel. I don’t know about the state levies. Thanks to an alert commenter here at Chicago Boyz!

You can expect to see a growing debate on CNG in the future. There are many articles across the web about use of CNG vehicles for local fleets (which is growing), and other articles about use of CNG for long haul trucking (the infrastructure is not there today and the range is relatively short). There are proposals for incentives in the form of tax credits to push further investments in trucks, engines, and retail infrastructure. The issues around allowing US natural gas to be liquified and sold to foreign countries for its “market” price rather than being limited to the US, where it fetches 1/5 of the world-wide price, is another topic that will become a campaign and policy issue.

It is likely part of America’s relative descent that we are even considering closing our borders and not allowing natural gas to sell at a market rate, thus benefiting our domestic customers. Typical economic medicine that free-market experts recommend generally calls for removing subsidies that distort local economies, especially those tied to food and fuel. The fact that America is seriously considering forcing US owners of natural gas assets to sell their products to a captive market (by restricting the building of LNG export facilities and pipelines that would enable distribution) at a very large discount to what they would fetch overseas is the type of economic distortion that should raise eyebrows but is sadly all too typical of our current interventionist regulatory policies.