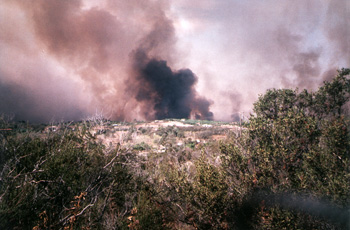 (This is a picture that my father took of the 2003 Paradise Mountain fire coming towards their house – the puff of black smoke is probably from a burning structure, maybe a vehicle. The rest of the pictures on that roll of film were of the house interior – to document for the insurance company.)

Reading the news about the fires burning near Colorado Springs revive memories of what it was like, when I was growing up in the hill country – the hill country of Southern California. Then it would be hot and dry all summer long, the green grass of spring would turn gold, the chaparral – the native brush – would dry out . . . and then . . .

The winds would blow, the hot dry devil winds from off the high desert, which some called the Santa Ana, or some the Santanna. And then the hills would burn. A spark from a string of broken Christmas lights, the sun shining relentlessly through a piece of bottle grass, a bulldozer blade striking a buried flint rock . . . or even some fool throwing a lit cigarette out of a car window, or messing around with fireworks. Within seconds the sparks turn into flames, and the hills would burn, with the hot desert wind fanning it to a greedy blow-torch roar.

A well-lit brush fire does make that horrible, deep roaring noise as it burns, a noise to make everyone hearing it feel cold and afraid down to the toes of their boots. Once fire is well along in dry brush and timber with a stiff wind pushing, there is very little to be done – only see that it is deflected from structures. At a distance, the clouds of smoke pile up in the sky like thunderheads. There’s no mistaking the smell of a distant fire, the pale beige smoke of it hanging in the sky, the way the sky then turns pale orange, and the daylight dims . . . or to mistake the fall of fine ash, drifting in eddies along the ground for miles distant and days afterwards.

It is an unforgettable sight, seeing a runaway brush or forest fire, especially at night. In the fall of 1975, from the hilltop above my parents’ home, I watched such a fire, advancing over the mountaintop crests of the Angeles National Forest, a line of fire across the horizon as far as one could see. In some places, it looked like a tornado of flame, sweeping down a steep canyon, sucking material into it. We escaped that particular conflagration, thanks to being across a well-built up valley from the closest point that fire came to us, but nearly three decades later, my parents were not so lucky. They had retired to Valley Center in northern San Diego County – and in the Paradise Mountain fire, theirs was one of the houses lost. They had twenty minutes to pack their vehicles and go, losing nothing but things – things which can be replaced, although some of them – pictures, books, old letters, certain items of china and relics – have since been sorely missed.

A couple of summers ago, my daughter went outside to water the plants, she came back, exclaiming excitedly that she smelled smoke. There was something burning, something to the north and east of us, borne on the wind. We know that smell, that hazy look in the sky. My daughter called the local non-emergency number, stressing over and over again, that there was something on fire close to us. Given the summertime drought and the strong winds blowing, plus our own experiences … that was enough to make both of us jumpy. Eventually, the operator told her that yes, there was a fire in a house over on Judson, which we agreed was probably what we had smelled. My daughter was so shaken that she went out and watered down all our yard within reach, aiming the spray up into the trees and over the fence into the green belt – now the brown belt. A few weeks later, we spotted the smoke of another fire away up north, towards Bulverde. She went and watered everything again, just to be sure.

Hearing the sound of sirens at this time of year, my mother used to tell us to run up to the top of the hill, and see what on fire, and on our report – a house down in town someplace: “Oh, only a house, then. Not the hills.” But that’s what you always think, in fire country.

(cross-posted at my book blog. And if you scroll down, I’ve posted a sample chaper from my next book – The Quivera Trail. )