Recently I visited a brand new, multi-story Walgreens in the heart of Chicago. The entire store was bustling with customers purchasing everything from makeup to greeting cards to alcohol to sushi. And the loneliest part of the store… the “newsstand”. 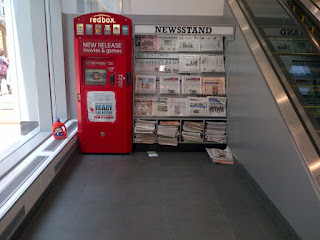 As someone who grew up with the idea that writing, literature, newspapers and discussion of the above was a part of the civic fabric, like exiled writers in twentieth century Paris, the deadness of this scene confirms that these are past dreams gone for good. Today none of these things would happen tied to newspapers or a newsstand; maybe at a Starbucks? I think not.

On the other hand I saw the Wall Street Journal magazine for the weekend which contained a day in the life of Ariana Huffington of the Huffington Post, who sold out her “empire” to the purveyors of dial-up lines and dusty past web glories. On the top she is petitioned by nine bloggers who want to get paid for their work… but later that night she signs up two new bloggers seeking to join her site. 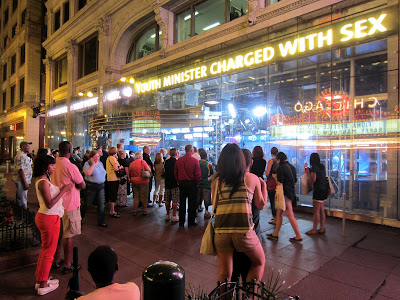 But why would bloggers flock to a site that apparently incites writers to picket for lack of proper payment to writers?  Fame, of course, and the personal validation that comes from having your name out in public, whether online or on TV.  Up above you can see the crowds forming outside the 10pm evening news which is broadcast live on State Street in Chicago just south of Lake Street.  Perhaps the camera will pan out into the audience outside and you could be on TV, even if just for a moment?

People wanting to get paid for writing this sort of thing are deluding themselves; there is certainly money to be made on the Internet, but to think that these nickels will trickle down to the writers of standard fare such as that found on AOL is ludicrous.  You are being paid in fame, such as it is, and when you step aside and demand compensation you’ll just be passed up by someone else willing to do it for free.

Dan and I are constantly chuckling and those wanting to join a site like “Life in the Great Midwest”, ostensibly to “get their foot in the door” and begin writing.  I’m sure many / most are shills for products or marketers trying to get their name out there; we aren’t interested.  Not that we aren’t interested in new members of the site – we found our good friend Gerry when he asked if we could write for the site and we said sure and now we are lucky to know him (plus a lot of good articles and photos, to boot).

I do feel sorry for writers that are used to some sort of semblance of control and structure in their lives.  You worked in a newspaper or publishing house and received a salary, benefits, an annual raise, and the possibility of promotion.  At the top there was some glamour and the ability to meet someone famous and take part in their fame, however fleeting.

Those days are as gone as the dead newsstand and the abandoned Borders bookstore a bit south of the TV studio on State Street.  No one is paying you for content because, even if someone is making money off it, someone else will create roughly similar content for them, for free. Money has to be made off some other part of the site, or by becoming a public figure, or something else.