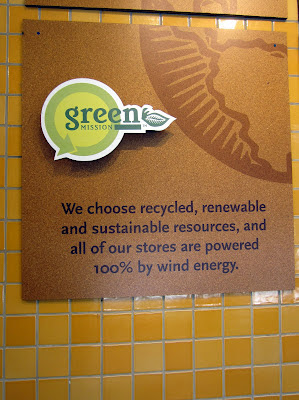 For Whole Foods, “environmentalism” means supporting wind power, and saying that their stores are “100% powered by wind”. What this likely means is that they buy power from renewable suppliers, paying an additional fee since that sort of energy is more expensive (unless massively subsidized by the government).

Power, however, cannot be economically stored. Thus the real time when you want power is when it is brutally hot outside, which in the Midwest often means little breeze and an overhead haze (which makes solar less economical). This means relying on traditional “base load” resources like coal, nuclear, or natural gas fired fleets.

When I walked into that Whole Foods it was a cold as a meat locker, and the flags hung limply in the breeze. Wind power wasn’t supporting Whole Foods when it was most needed; wind power blows whenever the wind blows, unreliably.

My suggestion to environmentalists is to just move their support of causes to the next level; the same way that vegetarians don’t eat meat, those that do not support reliable base load power (coal, nuclear, gas) along with the necessary (unsightly) transmission infrastructure to bring the power into your city (since having a plant near the city is usually out of the question due to noise and emissions), should TURN OFF THEIR AIR CONDITIONING AND THEIR ELECTRONIC DEVICES during times of extreme heat. After all, this is what that hated infrastructure is buying – reliability and power during peak loads.

Like those that pine for a diverse society yet move to far flung mono-cultural suburbs, those that value their environmentalist credentials above all should start “living the sweat lifestyle” that they believe in. Turn off that air conditioner, and don’t be part of that peak consumption, which in turn justifies the base load power in the first place.