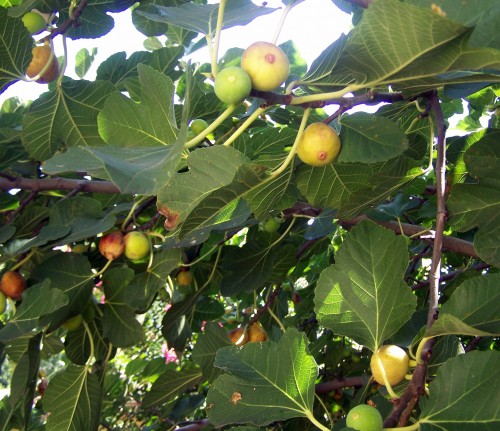 A neighbor of ours has a fig tree – an insanely prolific fig tree, to which we have been going regularly and with permission – to harvest the bounty. And a bounty there is; so much that we came and took about six or seven pounds yesterday morning and today when we went past their house with the dogs on morning walkies, the senior lady of the house called out to us, and said that we should come by and pick some figs. There is a point in fruit-tree production, when energetic picking of the ripe barely makes a dent. I learned this early on, when we had an orange tree at Hilltop House, an orange tree which produced and produced and produced so much that the ground underneath it was redolent with the smell of rotting oranges. One very hot and dry summer, my sister and I quixotically decided that we ought not to let all of this go to waste, so we went up one morning, picked several large brown paper shopping bags of those that were ripe (and that was barely a fraction of the fruit on the darned thing!) and worked until nearly midday, halving and squeezing the oranges … which gave us too many gallons of orange juice to fit into the freezer.

The brush at the top of the hill caught fire that day, and after it was extinguished, we took the many jugs of freshly-pressed local orange juice up to the firemen, who appreciated it greatly. But after that point we kind of decided that … we’d just use what we needed. So it was when I lived in a tiny house in South Ogden, which had a hedge of apricot trees. The ground underneath them was paved with rotten apricots and mined with the hard pits, and never mind that I did with them what I could, brought bags of them into work to swap with co-workers who also lived in owned or rented properties which also had bearing fruit trees planted in their yards, dried them, made preserves out of them … so I can understand that the people living in the house with the fig tree in the front yard are now probably sick to death of the sight and smell of them. But still – free fruit is not to be scorned, especially in this economy… and so I’ve been drying them, and making jam and preserves, and even fermenting a couple of gallons of fresh fig wine out of the bounty of figs. (I really wish that the various developers and owners of houses in Texas had done more often what was routine in Utah – and that was to plant at least one bearing fruit tree per housing unit.) 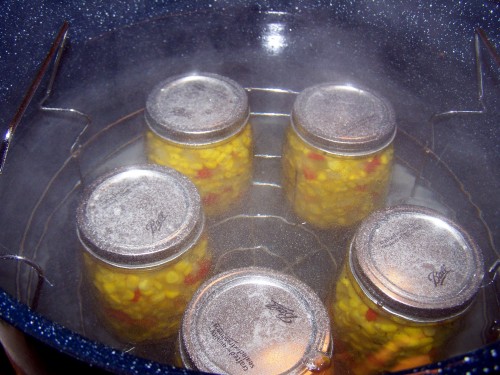 Some of this out-put of the canning kettle will be used for Christmas presents, but the rest of it – pickles and relishes, mostly – will be used for home consumption. The okra and mixed vegetable pickles are divine, by the way. And cheaper than purchased, even figuring in the cost of making them … which is one of my reasons for going all D-I-Y in the first place. The other reason is that maybe I am being affected by the current atmosphere, or the whispers of my grandmothers, who routinely stockpiled supplies of preserved foods against winter (Granny Jessie, who grew up on a farm) or Granny Dodie, (who lived through the Depression and whose garage held about two years worth of canned foods.) There’s something reassuring about knowing you can get along for a couple of weeks or moths on the stocks of food on your own shelves. And right now, this is one thing that I can do. 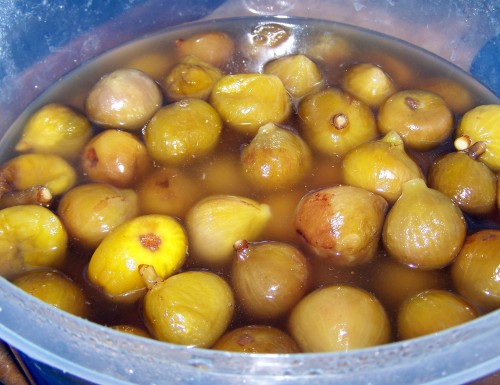 This is one of the best old fashioned and simple recipes for preserved figs, by the way – from The Gift of Southern Cooking: sprinkle two pounds of fresh figs (anything other than the black Black Mission variety) with two or three tablespoons of baking soda, and soak for five minutes in boiling water. (This toughens the skins of the figs so that they stay whole.) Drain the figs and rinse them in fresh water, then put them into a non-reactive pot (that is, enamel or glass) and sprinkle two cups of sugar over them. Steep the figs in sugar for at least twelve hours, until the juice from the figs has begun to liquefy the sugar. Simmer for ten minutes, cover and set aside and let steep overnight. Simmer ten minutes, set aside to steep. Repeat once more, and at the end of the third simmer, remove the figs with a slotted spoon and pack into sterilized pint canning jars. Strain the syrup, and simmer until it reaches °220 degrees, pour over the figs, and process in boiling water for fifteen minutes. The canned figs are thus to be aged a month before being eaten.

(Cross-posted at my book blog.) 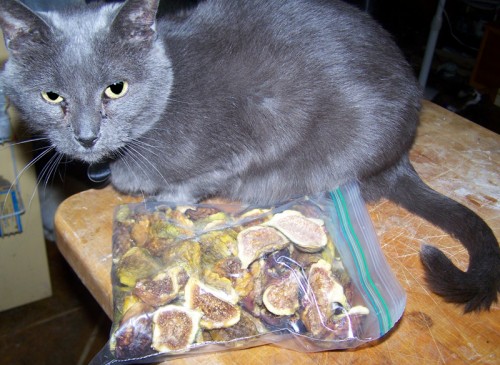