In the US we hear frequently about the environment and how we are doing so much damage to our environment. It would be good for people to visit India to see actual pollution in action on a large scale. 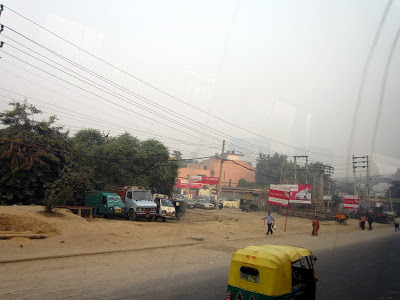 As we drove around Delhi, the smog was amazing, even with all the vehicles that converted to CNG from diesel (in this picture you can see a tuk tuk in “CNG” yellow and green colors). In this photo there are a couple of huge office buildings right off the road but you can’t even make them out in the smog. We asked our guide if the CNG over diesel made any difference and he said that in the days before the conversion “if you wore a white shirt outside it would be colored grey from all the soot in one day”. 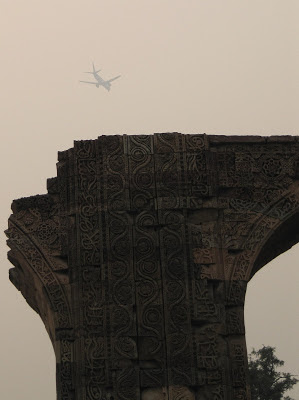 This photo shows a jet flying over a famous minaret in Delhi. You can see the smog there, too.

I felt like one of those cartoon characters where when you cough “dust” flies out of your mouth. One of my close travel mates blew her nose and it just came out black. And we were in a tour bus much of the time that was just from being outside seeing the monuments (and then getting herded back in the bus).

With the CNG and investments in public transport it seems that India is trying but the current state seems unimaginable to a Westerner. I really don’t think that I’d be able to survive in Delhi for an extended period of time since I have allergies unless I never left the house.