While in India I was struck by the myriad number of police and security personnel that I encountered armed with a wide varied of weapons from a large bamboo stick (a lathi) to an old shotgun to myriad variants of the AK-47 (since the Indians have long relied on Soviet weapons). 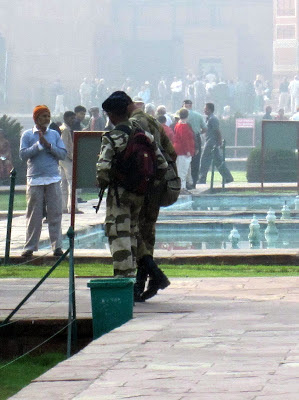 I have a general policy of not taking photos of people with guns and I thought this was a doubly wise policy to follow in India. The above security forces were at the Taj Mahal where everyone was taking photographs anyways so I thought that would be harmless.

The number of police forces and security forces you encounter on a regular visit can be staggering. There were armed soldiers (actually paramilitary forces, although apparently they don’t like the term in India) with AK-47’s checking your ticket at the major airports. I always wonder why you’d arm someone with an MG like this in a crowded situation since it would be hell on civilians but I guess they are likely preparing for a heavily armed terrorist attack more than a typical criminal encounter.

At the famous facilities like the Taj Mahal and the Amber Fort many of the security forces were unarmed but in uniform. The uniforms generally seemed clean and organized at the main tourist attractions.

This wikipedia site details the various security forces within India, which don’t include the main branches of the armed services. Malls and stores also had armed guards, particularly those dealing with gold and jewelry, although one old shotgun I’d bet hadn’t been fired in a decade or more.