The Taj Mahal is as beautiful as you’d expect it to be. It is in Agra which used to be an earlier capital of India. We arrived early in the morning trying to get a sunrise shot but the light wasn’t right. We still had an opportunity to take great pictures.

This is the classic front view. Sometimes if you waited long enough you could get a picture with a better reflection and with no people in it but I wasn’t that patient. 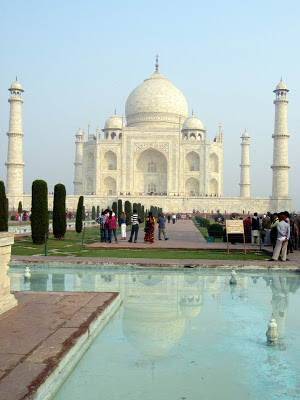 Since the site is so massive it is hard to get all the minarets in one photo. Here is a view from up front on the side. Once you understand the scale of this it is even more amazing to think that they proposed building a version of the Taj Mahal in Dubai that is even larger (and includes a hotel). 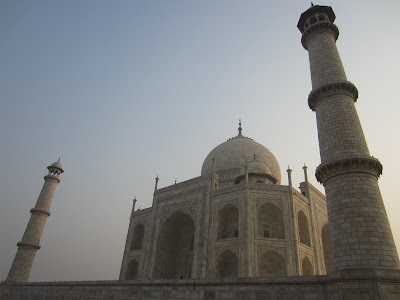 On either side of the Taj Mahal there is a mosque and another building for architectural balance that was used as a guest house. Pilgrims are here to visit the mosque. 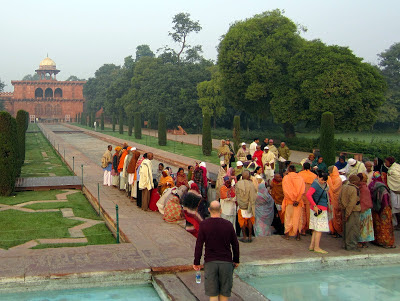 There is a river behind the Taj Mahal. The location was chosen so that you couldn’t build anything behind it that was larger, nor anything adjacent due to the large size of the complex. Apparently being dwarfed by future kings was a serious concern in those days. 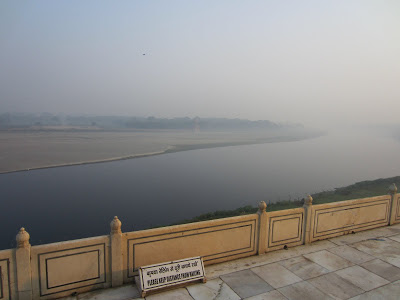 Here is view of one of the rear minarets from behind the Taj Mahal. It appears tilted because of how large it is and how difficult it is to get it all in one photo (especially with my limited photo capabilities). 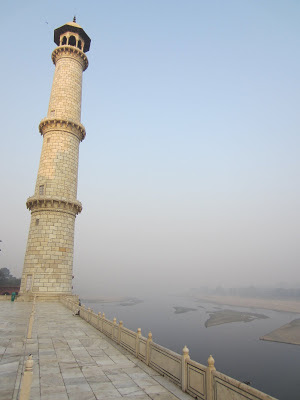 You can’t really take photos from inside the Taj Mahal (not allowed). Some people did sneak photos inside but it was too dark and you need to move reasonably fast with the crowds so it doesn’t really turn out too well anyways. There is a single light inside the dome that was apparently put up by the British.

While many things were destroyed in India as kings replaced other kings apparently the Taj Mahal was spared because it is in fact a tomb. It is amazing to think of the vast effort that was spent to build this tomb; funds that could have been spent on development of roads, the economy, schools, universities, etc…

Also interesting is how the Taj Mahal was camouflaged for WW2 vs. Axis bombers or against Pakistan in the various India – Pakistan wars. Here is a link to the 1971 camouflage photos.

2 thoughts on “The Taj Mahal”