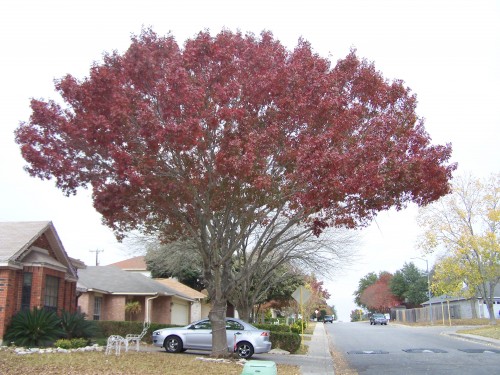 Our neighborhood – the street that we live on – is in the news today because of a double murder last night. We didn’t know the victims personally, although we might have seen them now and again. We knew the house, as we walked by it frequently – like nearly every day. We definitely had talked casually to some of their close neighbors; this is the kind of neighborhood and street we live on. People know each other – and their dogs – by sight, wave to each other’s cars, take note of the condition of the yards … that kind of casual suburban thing.

The house where the murders happened is on one of the main cross-streets in the suburb where we live, about three blocks uphill from our house. At about a quarter to five last night, as I was starting to put dinner together, we heard a siren in the street just outside, a siren which cut off very abruptly. Blondie cares for an elderly and disabled neighbor who lives a little way up the road, and our first thought was for her, as she has had to have the ambulance come for her a couple of times. So Blondie ran outside, to see what was going on – sirens in the neighborhood are rare enough that running outside to see what is going on is a perfectly understandable reaction. She did not return immediately, and after a few minutes, I went outside as well – to find a good many of my neighbors standing in their driveways, looking up the street. It was just getting dark, and there looked to be a perfect convention of police cars clustered in the road at the top of the hill, and more screaming past at every moment.
“There’s been a shooting,” my next-door neighbor reported. “And the man who did it ran down the street. He went right past … D____ (the next neighbor over) was just leaving for work in his truck, and he tried to get D_____ to give him a ride! He went that way!”

Another close neighbor had been running out her trash can when the shooter ran by – when a police car screeched around the corner, practically on two wheels, she flagged the patrol car down and gasped out a description, which turned out to be mostly although not completely accurate. It seemed that the shooter was on the loose and still in the neighborhood – all this as people were coming home from work. More lights and sirens, baffled neighbors just returning home, pulling over to ask us what was going on, as police cars burned rubber going around corners. The road was blocked – and the police were only letting residents in. A teenage girl came down the hill walking home from the high school, exclaiming about the shooting; Blondie told her to wait – she would get her own car and drive the girl home. When she got back, she went to check on another neighbor, diagonally across the street. Meanwhile, helicopters rotated overhead – flashing red and green and white lights. The smallest and speediest was a police helicopter; the others, said our next-door neighbor, were from the television stations. It was already on the news, that there had been a shooting; at first it was that some kind of Fatal Attraction thing; a jealous boyfriend had killed his girls’ father. Then it seemed there were two victims, and it wasn’t a jealousy thing at all. Another van went past – the medical examiner, or maybe the evidence lab van. Our immediate neighbors were all accounted for, and all right. We were not much worried about the prospect of a single armed man on foot – not with what seemed like every patrol car on day-watch screaming up and down the street, and anyway, if you did a shake-out of every house in the neighborhood, you’d likely find enough small and medium arms to fit out a small European country’s military. Our neighbor laughed, at that – and told us what she had sorted out from her mother-in-law’s personal armory, including a machete tucked between the mattress and box-spring of the master-bedroom bedstead.

It eventually calmed down after about forty minutes – the news helicopters vanished, and there weren’t as many police cars, although there were still flashing lights at the top of the hill. The shooter was reported to have been captured in a nearby strip-mall; the parking lot of the HEB grocery store which we frequent, about a mile away. It turns out that he was a disgruntled former employee or perhaps business associate; the two people murdered were a husband and wife. They had only lived here for about a year. Their 20-year old daughter jumped from an upper floor bedroom window to escape. I don’t think there was anyone in the house today, although there were a couple of news reporters around doing follow-up stories this afternoon. (Local news story here.)
We told them – this is not a neighborhood where this kind of thing happens routinely and without comment.
(View of our street – it all happened at a house at the top of the hill.)

15 thoughts on “A Touch of Murder in Suburbia”