Something funny happened on the way to the couch.

I have recently moved to a farm property where we put up a house.  Before we got the Dish set up, we were restricted to whatever channels the digital rabbit ears (do they call them that anymore?) could drag in.  I found myself watching TV shows on MeTV that brought me back to my youth.  I have very much enjoyed watching those old Emergeney! shows, along with The Rifleman.

To tell the truth, I am only using the dish to get my sports fix and using the digital rabbit ears for the occasional bit of entertainment.  But I have become recently re-devoted to The Rifleman.

When I was a child I remember watching reruns of The Rifleman.  You remember the opening scene, don’t you?

I have been endlessly fascinated how I view this show now versus when I was a kid.

When I saw the first show a few months ago, I knew that he got off an extra shot in the opening scene, and immediately recognized that the modified rifle he carried around wasn’t even in production until 20 years after the show is set.  I saw that there was no kick, and hardly any smoke, also wrong with that particular firearm.  I also knew that the rifle must have been double modified – not just that screw in the trigger to make the trigger go off each time he slammed home the rack, but that in some of the ways he shoots it, the cartridges would simply fall out of the weapon unless there was some sort of modification.

But that is all just gun nut stuff and pretty minor unless you are a stickler for detail like me.  You can see lots of other things that they didn’t have in the New Mexico territory in the 1880’s as well, if you take a close look at the show.  Or you can sit back and just let it happen.  Which I do most of the time.

After watching for a bit, I noticed how huge of a man Chuck Connors was.  Upon reading his wiki, I found out that he played professional baseball and basketball, and was even drafted by the Chicago Bears for football, but never saw the field in that sport.  Here is a photo of him from that wiki entry from his time with the Brooklyn Dodgers: 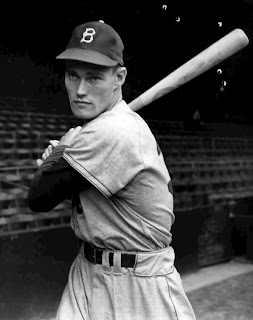 I also am now much more interested in the production of the show, namely how they ride the horses, have them tacked up, and how they drive them.  There are stagecoaches with teams of four, and all sorts of other carts and things that have more relevance now that I actually own some horses.  The wife is the one that rides and drives, but I find it interesting.

The Rifleman is a force for good.  He isn’t Robin Hood by any means, rather is more of a justice vigilante.  He isn’t a deputy or marshall of the law, as that duty falls to Micah on the show.  However, The Rifleman dispenses plenty of instant justice as he sees fit.  And it is always justified.  The Rifleman is the good guy.  At times, judge, jury and executioner.

He is a single dad raising his son right.  In a scene at a restaurant he asked Mark, his son, what he wants for dinner – Mark replied that he wanted the special cake of the day.  The Rifleman replied “before that”.  Mark wavered, so The Rifleman ordered for him – meat and potatoes and double serving of vegetables.  “After that, cake”.  No arguments from Mark, just a nod and obedience.

The Rifleman doesn’t take sh1t from anybody.  If you steal from him you get punched.  But you will never meet a kinder gentleman if everything is going smoothly.

In the town that the show is set in, North Fork, everyone is walking around carrying guns of every sort.  The Rifleman almost always has his rifle in his hand, even when going shopping, or to a restaurant, or whatever.  To these men, the guns are portrayed as tools of the trade.  And now that I am living on a farm, I will say that a gun, especially a long gun, is indeed a tool that is required.

I don’t think a show like this could ever be pulled off today.  Nor do I think that the Hollywood and/or TV executives would make one.  There is a rumor that there will be a remake of the show, but we will see.

As the moral standards of the US have declined, the TV content has submarined as well.  It would be amazing if in todays market a show that featured a
1)  single dad raising son right
2)  white guy
3)  force of good
4)  vigilante
5)  people walking around with guns that aren’t cops

would ever get off the ground.  It just wouldn’t happen.  The show was made in the late fifties and early sixties when attitudes were different and to me, things were simpler.

Times change.  As someone famous told me once, “you can’t go home again”.

20 thoughts on “The Rifleman and Modern Society”