In the River North neighborhood of Chicago there are many affluent customers packed into a small physical area. The vast majority of these individuals shop online and receive physical packages as a result. 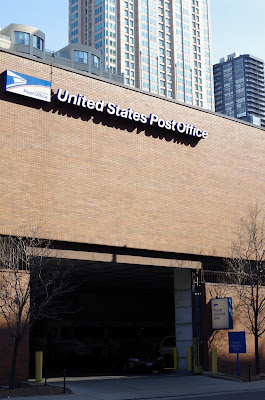 And yet the post office building that sits right smack dab in the midst of all these package-receiving citizens is not a hub of activity; many times it seems empty and forlorn.  Why is that?  It is due to the fact that the US mail system, which provides service across the United States, is not viewed as either a reliable or competitive delivery mechanism for e-commerce goods delivery, and the flood of packages that arrives is generally delivered by either UPS or Fed Ex.

The post office dutifully delivers all the stuff I don’t want – junk mail, catalogs, bill reminders, an occasional holiday card for those that are sent via snail mail, and notices from governmental entities that haven’t joined the internet era (to their credit some of them have moved much of their operations to the internet).

While the post office is crippled by liabilities, benefits, civil service protections for workers, and a mandate to serve every US address for first class mail, they would be in a much better situation if somehow they had been able to capture a significant share of the package delivery market that flourished right beneath their noses.  This article from Slate describes the situation as it exists today.

The loss of the package delivery opportunity is only the most obvious squandered one; think of what the post office COULD have done tied vai the internet (guaranteed, reliable domain names linked to addresses for bill paying or as a pre-cursor to social media) or with sales of goods since they have access throughout the entire USA.  However, given that they were set up as a monopoly to do one thing well (deliver first class mail), they didn’t have much pressure to innovate.

In the end the post office is mostly a machine to employ government workers, spread throughout the US and in every congressional district.  Per wikipedia (which has a solid write-up here) the US post office employs 574,000 workers, with government perks, pensions and benefits that most of you will never receive, in order to deliver that mail that you mostly throw into the recycling bin.  The proposals that they are floating show how tied their hands are; they want to cut Saturday mail delivery which will make them even less competitive vs. UPS and Fed Ex – they aren’t really talking about ways of outsourcing services and cutting expensive staff en mass which would be needed to move even close to breaking even.

The post office is probably just betting that their employees (through lobbying) and government protectors (the politicians) will be enough to stop significant cuts while their service (first class mail deliveries) becomes ever less essential.  Since we bailed out the banks and print enormous amounts of money to fund the US deficits, who will ever even notice tens of billions of dollars in losses on first class mail service to boot.

The sad part is, they are probably right.