With the employment prospects being what it is these days, I have read repeatedly in the last couple of years that really enterprising individuals are tempted to turn indy and go free-lance. They look to establish a small enterprise, vending whatever talents and skills they possess as a so-called ‘independent contractor’ to the public at large, and earn a living thereby, rather than scrounge and maneuver and hope for a paying job on the bottom rung of the corporate and/or government establishment. Pardon the sarcasm – it seems that certain large and well-connected established corporations these days are almost indistinguishable from the government, at least to judge from the rapidity which which the well-connected move back and forth.

Oh, but enough about national policy – this all next is personal. My daughter and her best friend from high school have come to that point, of seriously pursuing independence in their own business. Edith – the best friend – is qualified as a nurse, and has two children and a husband who works at a blue-collar job. She lives for art – passionately, as she is a skilled painter with a small local following. Yes, it sounds improvident to give up on a sure-thing … but I can sympathize deeply. I also came to that point where I just couldn’t do a normal job any more. I had to go and do what I loved as a freelance writer and partner in the Tiny Publishing Bidness. 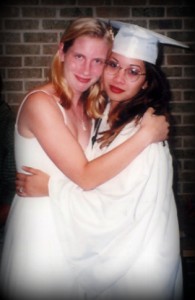 My daughter Blondie, the two-hitch Marine, currently works three different part-time jobs, having gotten the sense that until the higher-education bubble bursts, there is no use pouring any more of her G.I. benefits down a rat-hole. So, she was agreeable to Edith’s proposal that they form a business partnership. Blondie also has some artistic talents – although not a painter. She dabbles in beading and origami, and devises rather clever paper jewelry and hair ornaments. Blondie has a sense of organization, through having been an office manager – and through me and the Tiny Publishing Bidness, an idea of how a small business needs to be nurtured and run … especially when it comes to things like … oh, sales taxes, keeping track of expenses, customer care, buying a domain name and publicity. All of these things, Edith had never really considered before; she’s the dreamer, Blondie is the level-headed organizer.

Edith’s father is going to contribute a certain amount of money next year, to be used specifically for necessary art supplies for this business; myself, I can contribute nothing beyond skill with words, a camera and advice. They are starting slowly and carefully; tables at local art shows this summer, a website, plans to sell small prints of Edith’s paintings, of appearing in art shows and galleries. Blondie and Edith both have a very good idea of who they are appealing to with their paintings and paper art. There is a thriving art scene in San Antonio, concentrated mostly in a funky but slowly gentrifying area called Southtown. Ideally, Edith and Blondie would eventually like to have a retail establishment and gallery, either in the heart of Southtown or on the fringes, one which incorporates living quarters over the gallery for Edith’s family. Eventually, Blondie would like to sell the occasional bit of vintage furniture, glass and decorative elements through this outlet. She does have the eye for good-quality vintage stuff, and after going to a couple of estate auctions, knows exactly how little such items go for at auction – and then how much when they appear in a retail antique outlet. We would also like this future venue to offer book-signing events for local authors, many of whom do not feel well-served any more by the one independent local bookstore. But that’s a dream far in the future.

As for now, we are nurturing the seedling of the business – which, incidentally, is being called Pastel Junque. I’ll keep posting updates.
(Crossposted at www.ncobrief.com)

11 thoughts on “The Way We Do Business Today”