This photo has been making the rounds lately; the leader of the free world in (yet another) awkward moment. 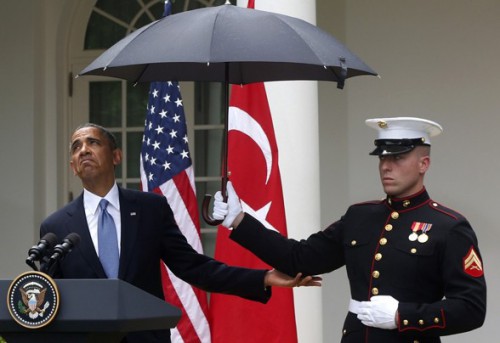 I first saw this when watching the news with my wife, and I blurted out – “did they really need to have the Marine hold that umbrella? How insulting to the Corps. It doesn’t look like it is even raining very hard.” My wife laughed and said (wisely) “why on earth would you expect anything different from Captain Zero?”.

And what in blazes is the President doing touching that Marine? If he wants the umbrella adjusted, couldn’t he just ask him to raise it a bit higher?

I also noted to my wife at the time that it is likely against uniform code for the Marine to hold the umbrella, and that was proven to be correct (no males in any US armed services are allowed to hold an umbrella while in uniform). However, I am sure that following orders (especially from the CIC) outweigh that detail, and the Marine did what he was told. As always.

But, you know, sigh.

This last five years have been absolutely brutal for Obama and his handlers in all sorts of public situations, over and over and over. The President’s handlers either are just a bunch of idiots, or Obama is simply not listening to them. They have no understanding of what the cameras will capture, how things will look ahead of time, or what protocol even is. Someone in that office should have seen the forecast and mentioned to the President that if it rains, would he perhaps like a STAFFER to hold an umbrella for him, or does he simply want to be tough and soak up a raindrop or two, or (insert many non embarrassing options here).

But no. Again, we get another breakdown and millions of people get to point and laugh or shake their heads in disgust at the President and his staff for being insensitive, and just downright lazy and dumb.

It makes me worry that the whole damned administration is run like this. Amateur hour at the White House, as a friend of mine recently said.

39 thoughts on “Commander In Embarrassment”