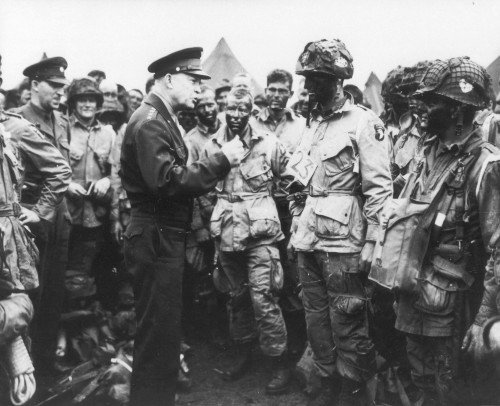 It was late afternoon of June 5, 1944. Eisenhower had given the order to launch the invasion. There was a window in the bad weather, and it was a calculated risk that they could get the army across the Channel and landed in France. The paratroops were going under cover of darkness the night of June 5/6. Eisenhower, having given the order, had nothing to do, but he couldn’t sit still in his office doing nothing, so he decided to visit the paratroops before they got on board their planes. Very high losses were expected among these men, men whose fate Eisenhower had personally decided a few hours before. Eisenhower was an excellent football player, which got him into West Point. He was also a very good football coach, coaching teams at his various army posts during his career. You can see him here, doing what he knew how to do, giving the team the pre-game talk.

The American people rose to the occasion, and did what they had to do.

The American people will always rise to the occasion and do what they have to do.