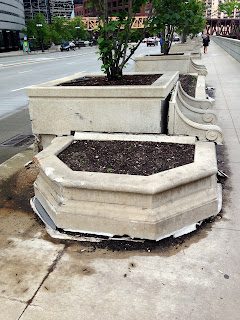 While walking along Wacker Drive in a tourist-y part of downtown I passed this planter that had been recently rebuilt over the last few years.  Obviously the cold winters and the damage they cause were not contemplated by the “A” Team that built it.  While you can’t judge infrastructure capabilities based on a planter, it is easy to find many Chicago examples of large overruns and delays including Millenium Park (4 years late and budgeted at $150M, ended up costing $475M).

We aren’t the only ones screwing up.  Der Speigel (English) describes how high profile German engineering projects have been recently failing, as well.  Their airports, government buildings, and train tunnels have many prominent examples of being far behind schedule and way over budget.  The article also makes the provocative claim that authorities deliberately mislead constituents by downplaying costs at the time of the initial approval, figuring that it won’t be their problem years’ later when the effort is complete and the overrun’s are tallied.

In many instances, the false calculations are deliberate. Werner Rothengatter, a researcher at the Karlsruhe Institute of Technology, has studied major public works projects around the world. He says there’s a similar pattern in democratic societies, where politicians have a tendency to deceive the public about the actual costs of these projects.
Rothengatter argues that cost overruns rarely come as a surprise — regardless of whether they are from the Berlin airport or Hamburg’s new Elbphilharmonie concert hall. During his research, he found that most politicians try to calculate the price to be as low as possible in order to obtain support for the projects — deliberately veiling the potential risks.
“Those who provide honest estimates for projects from the very beginning have little chance of getting them off the ground,” Rothengatter claims. Often those at the political helm take a calculated risk by assuming they won’t be held personally responsible if the costs start to explode.
In a 2009 study, “Survival of the Unfittest: Why the Worst Infrastructure Gets Built,” Danish researcher Bent Flyvbjerg of Oxford University argued that it often isn’t the best projects that are completed, but those that “are made to look best on paper.” Those, of course, are projects that “amass the highest cost overruns and benefit shortfalls.”

The idea that governments make poor project managers and select inefficient efforts for their largess (that they sponsor with your tax dollars) should be obvious, yet it is rarely commented on as a “core” reason for failure.  The idea that non-profit government institutions can make wise capital allocation decisions is actually quite popular and is likely a “given” among many of the young, given that the “free” market is demonized on most popular programming.  As the government makes up a larger and larger portion of our total economy, you can expect more bad decisions and lousy outcomes.

Government bodies inherently make impaired decisions, since they are insulated from failure and have many other parties to blame along the way.  In Chicago, in particular, if you are the selected candidate of the “blue” party and can slog through a primary, your election is guaranteed; many posts run unopposed (even in the primary).  It is hard to imagine anything short of epic failure resulting in being thrown from office.

14 thoughts on “Engineering for Failure”