In Chicago a “TIF” stands for “Tax Increment Financing”. Here is a link to the City of Chicago web site which explains how a site qualifies as a TIF. Basically a TIF limits the amount of property tax the city can collect at the location and in effect gives the owner / developer a big tax break. There are many reasons listed by the city as to why a location might qualify but supposedly it is used to eliminate “blighting factors”.

The Chicago Reader has written a series of articles about how TIF’s are used to reward already rich developers with tax breaks. The Sun Times wrote one this week:

It’s time for another serious look at the pros and cons of Tax Increment Financing in Chicago — a tiff over TIF — the controversial economic development program that’s supposed to revitalize struggling neighborhoods by offering financial incentives to potential investors.

The “sweeteners” come from property taxes that, to a large extent, might otherwise be spent on education, housing, parks, libraries, and public safety.

Another concern is that many TIF “districts” are in affluent areas, especially in and around downtown, which violates the intent of the state law that created the program in 1977 to revitalize “blighted” communities.

Here is a project that is being built under a TIF; this is for a $29M park alongside the Chicago River at Canal and Lake Street. the “River Point TIF” is obviously located in an area that doesn’t appear to be tied to much blight… 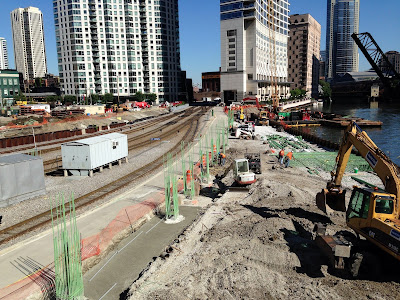 While it is likely that politically connected developers and clout-heavy individuals are tied to this process, on the other hand this is one of the few ways the city actually and concretely assists businesses that generate all of the economic value for them. Businesses pay very high property taxes in Cook County / the Loop and then the tax breaks fall back to the selective few that run through this process. It is a very opaque process and there is limited information available on the TIF accounts and funding.