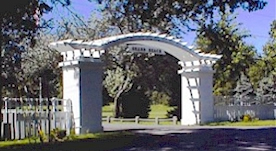 When my sister and I were very young, I was 10 and she was 7, we used to go on vacation to a small village on the lake in Michigan. It is named Grand Beach. It’s a delightful place across the lake from Chicago. Shortly after the war, we began to spend more time there in the summer. I vaguely remember the first time but the month we spent there in 1948 is one of my fondest memories of childhood. My parents, along with another family, the Coyles, rented a good sized house for the month of August through Labor Day weekend. The house is still there although no longer rented by the owners.

Thirty years ago, my wife Jill and I, plus our three year old daughter Claire, spent a week at Grand Beach with my sister’s family. My sister, Patty, and her husband rented the same cottage last year and this year I joined them for the week. The weather was delightful and we all had a nice time. It gave me a chance to know my nephew Jimmy’s children and my niece, Caroline, joined us for a few days. Jimmy’ wife, Holly, was there and had her hands full with the small kids. The women were also on vacation so we ate most of our meals out. When we were there 30 years ago, Claire hid under a bed with Patty’s dog. Jill was frantic looking for her until someone heard scuffling under the bed. We didn’t have any crises like that, at least.

The village is entered from a frontage road that runs along the railroad tracks. The gate is a large white painted arch that pierces a white fence along the road. In 1948, there was less foliage and I used to help the village policeman, who drove an ancient Model A Ford, retrieve the mail when the train passed and the mail pouch was tossed from the mail car. This was usually about dusk. There was a hook by the side of the tracks which was supposed to catch the mail pouch but they usually missed and I had a good time searching for the pouch along the tracks. 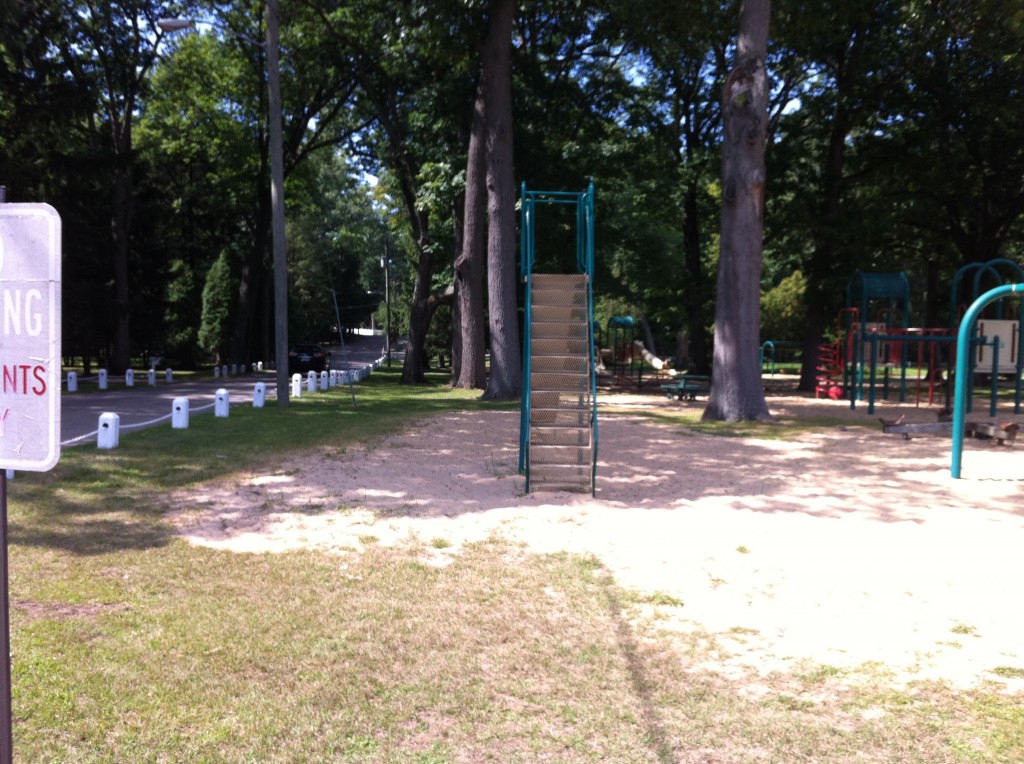 The entry road passes the golf course where I first played golf at age 9 and then the playground, seen here. The entire road is lined with white painted cement pillars that were there in 1948. They may have been there in the 1930s. 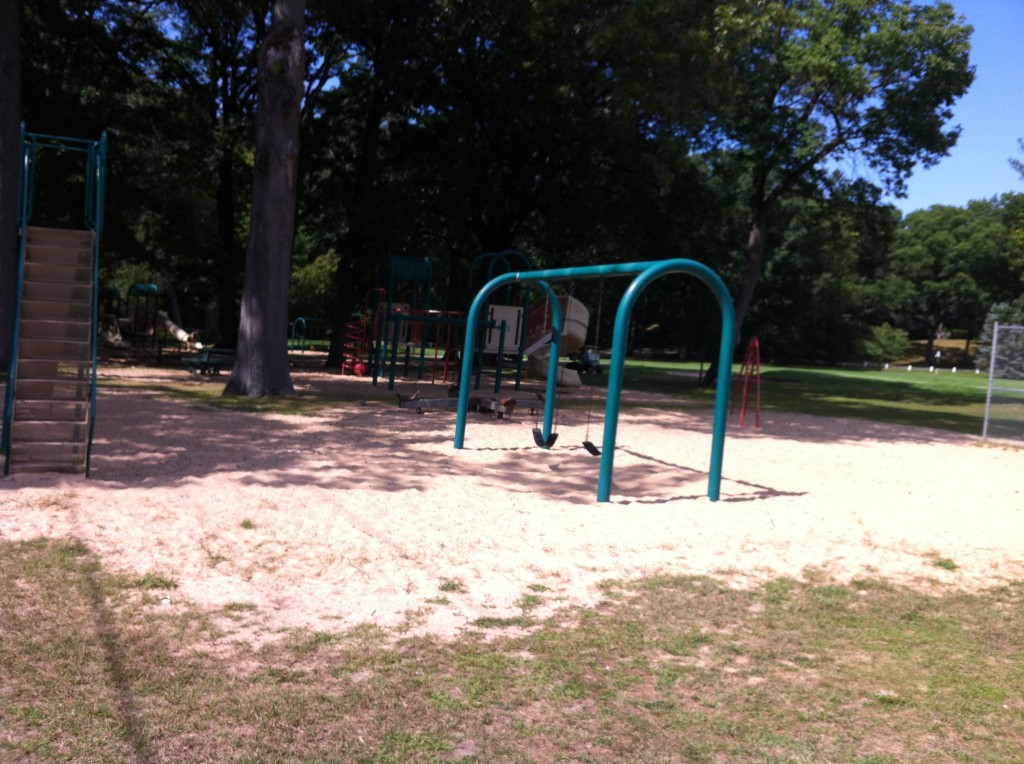 I have movies of the kids, Caroline and Claire, at this playground when they were small. I have to find them for Patty.

The history of the place is here. 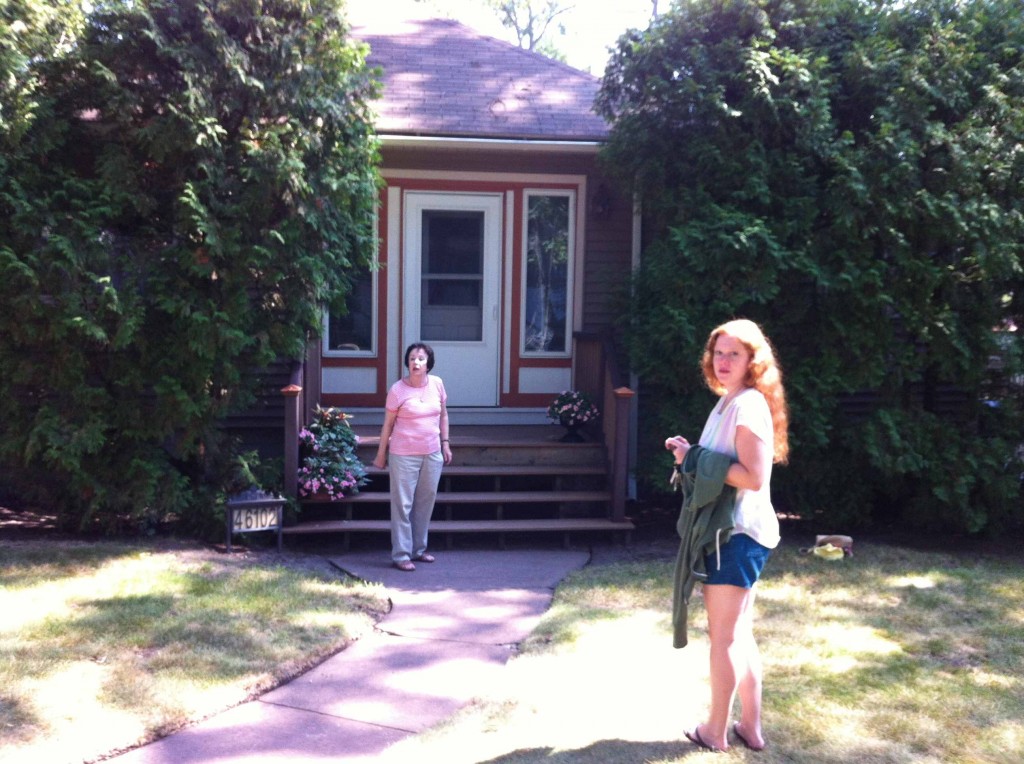 The front of the cottage, no doubt built in the 1930s or earlier has been changed with the addition of new siding. The bushes are larger than they were 30 years ago. Here are Patty and Caroline. 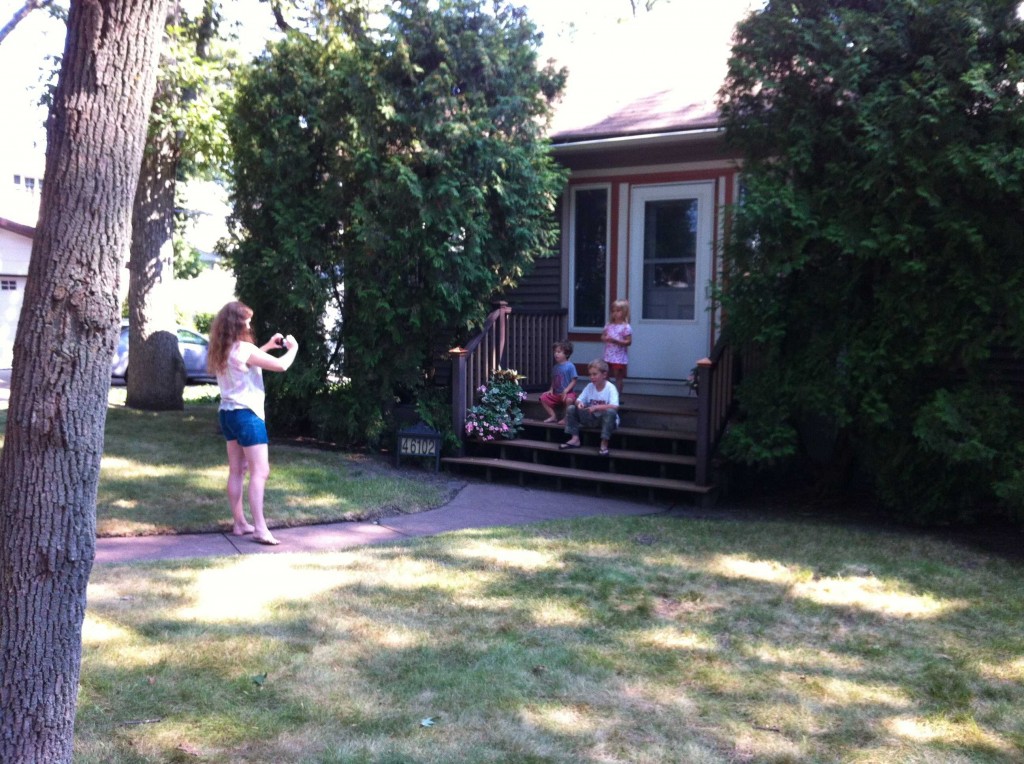 Caroline took some photos of Jimmy’s kids, Jimmy Jr, Aubrey and Nathan. She took photos of Patty, Jim Sr and me but they haven’t shown up yet.

More views of the cottage. 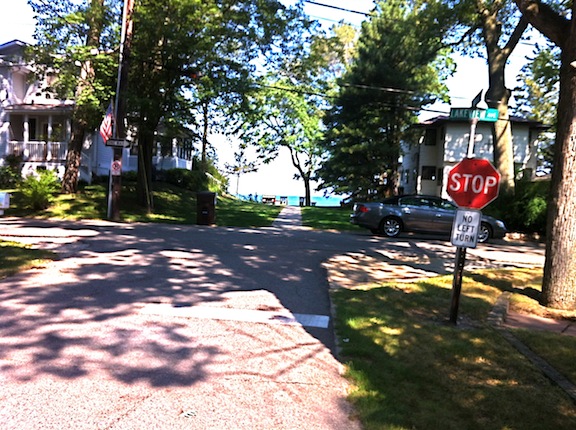 Here is a view of the street and the walk to the lake which is just across from the cottage. At one time in the 80s the lake level was much higher and some of the homes along the bluff were undermined and in danger of falling into the lake. It is back to normal and the walk ends in a staircase down to the beach. The location of the cottage is almost perfect and the owners have upgraded it inside, including another bath.

When I was here in 1948, a classmate of mine had an older brother with a motor scooter. He would whiz through the village along this road and the village cop would chase him in the Model A. I don’t think he ever got caught. The poor Model A was on its last legs. 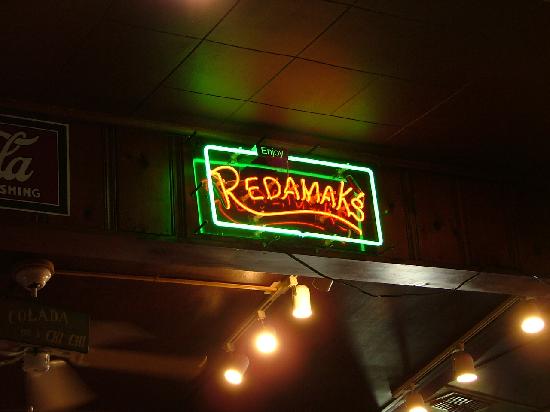 One of the places most people visit for lunch or dinner is Redamak’s in New Buffalo. It does an enormous business from May to October, then closes for the winter. This year, they had expanded into a back room that is almost the size of the rest of the restaurant. The menu is basic sandwiches and beer.

When we wanted a slightly more formal place, we went to the Stray Dog, also in New Buffalo near the harbor. It burned down last year and has been rebuilt. The entry is lined with dog pictures.

Caroline took lots of photos. She arrived on Thursday evening and went home with us Sunday. The last time I was there, she was about 5 and Claire was three. Times flies. Both are now married and thinking about babies.

More pics of the cottage. The owners have added a new rear deck and the deck is a nice place to sit in the sun or in the evening. I saw very few mosquitoes and it was cool for a few days.

In New Buffalo, we went to this place for lunch. It reminds me of Dartmouth in its decore. It had apparently been closed for a few months and was trying to rebuild its clientele. It is a very nice place with excellent service. I wish them well.

After dinner, everybody goes to Oink’s for ice cream. I weakened the first night and ordered a double scoop cone. It was size of a 16 inch softball, like the ones I used to play with in school. After that night and the reflux that followed, I abstained. 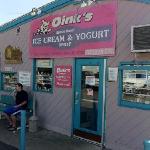 There are now some multimillion dollar new homes there but I like the old cottages. There is something that says “Midwestern” about them and they have been well cared for. There were lots of Obama bumper stickers but this is Chicago, and an affluent part of it, so I understand.

6 thoughts on “A Week in Michigan”