Way back in the day when LITGM used to do a bit more of the political type articles I wrote about Illinois representatives’ automobiles. I confused the Lincoln Navigator that Danny Davis (district one) drove vs. the Ford equivalent that Jesse Jackson Jr. drove, and a bit of web hilarity ensued. 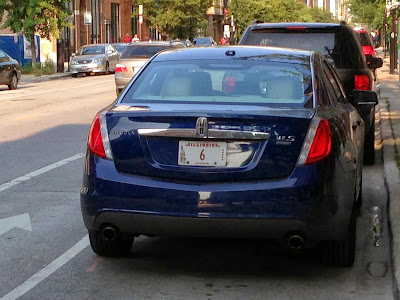 Recently I saw another politician’s car and the first thing I did was look it up – and this Lincoln is owned by a Republican in the 6th district, which happened to be Henry Hyde’s old district. It is a matter of how jaded I’ve become that the fact that an elected official drives a Lincoln is barely worth a web peep.

While American’s think that “big money” has captured politics, it is literally nothing compared to the wealth of China’s politicians. This WSJ article describes how wealthy the top Chinese politicians are vs. the USA…

According to the Hurun Report, as cited by Bloomberg, the 70 richest delegates in China’s National People’s Congress have a combined net worth of 565.8 billion yuan or $89.8 billion. That’s more than 10 times the combined net worths of all the members of Congress, the Supreme Court and the President. (Their collective riches are only $7.5 billion.)

Thus I can only imagine the rage I’d have over the same type of rich trappings if I were Chinese. Unfortunately, they can’t vote, and protests tend to go down badly with authorities. As bad as our system is, in terms of being captured by the interests of the wealthy, it is a comparatively egalitarian route compared to our largest economic competitor.