I have believed for some time that we were entering another Depression. I have previously posted about it.

The Great Depression did not really get going until the Roosevelt Administration got its anti-business agenda enacted after 1932. The 1929 crash was a single event, much like the 2008 panic. It took major errors in economic policy to make matters worse. Some were made by Hoover, who was a “progressive” but they continued under Roosevelt.

I posted that statement earlier and it got a rather vigorous rebuttal. I still believe it, however. I think a depression is coming soon. What is more, I am not the only one. Or even only one of two.

The second article preceded the election of 2012 but is still valid.

When employment hit an air pocket in December, most analysts brushed off the dreadful jobs number as an anomaly, or a function of the weather. They chose to believe Ben Bernanke rather than their lying eyes. It’s hard to ignore a second signal that the U.S. economy is dead in the water, though: on Monday the Institute for Supply Management reported the steepest drop in manufacturing orders since December 1980: 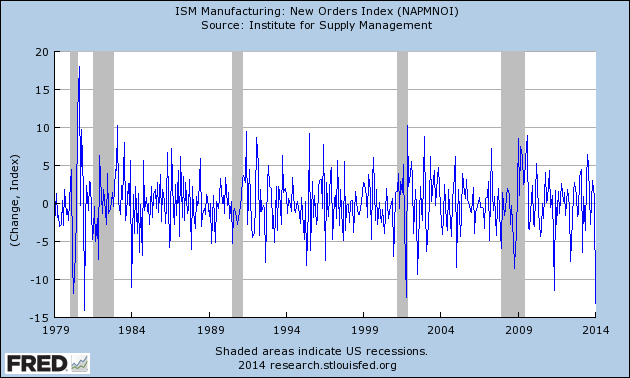 In January, only 51% of manufacturers reported a rise in new orders, vs. 64% in December. Not only did the U.S. economy stop hiring in December, with just 74,000 workers added to payrolls; it stopped ordering new equipment. The drop in orders is something that only has occurred during recessions (denoted by the shaded blue portions of the chart). The Commerce Department earlier reported a sharp drop in December orders for durable goods. In current dollars, durable goods orders are unchanged from a year ago, which is to say they are lower after inflation.

So, the economy stopped hiring, even at the poor pace the past five years have seen, but business also stopped buying.

This does not take into account the growing population. Also:

We’ve had a few deceptive signs of activity, to be sure. With the average age of U.S. cars on the road rising to 11.4 years as of last August, a very large number of vehicles must be replaced. Apart from student loans, the only category of consumer credit that expanded during 2013 was automobile loans. The replacement wave appears to be over and car sales have slumped.

Last year’s 30% runup in the S&P 500 was founded on the firm belief that things would get better in the future as they always had in the past. Can the stock market be so wrong? Twice in my lifetime, the stock market has given ridiculously wrong signals: during the tech bubble of the 1990s and the mortgage bubble of the 2000s. The Fed’s unprecedented provision of liquidity cheered the stock market, but it did not persuade lenders to lend or borrowers to borrow. The growth rate in total bank credit is close to zero, something we have seen before only in recession periods.

The stock market rise, while soothing to Obama supporting financial people, really represents the absence of other investment opportunities with interest rates at near zero. The last time this happened was in 1928-29.

The Fed has insisted throughout that the treatment was working and the patient was getting better. Americans know better: in late January, 74% of respondents to a Fox News poll said the country still was in recession.

What does Spengler advise ?

The problem is NOT government spending, contrary to the well-meaning obsession of the Tea Party. That will BECOME the problem a decade or two from now. The problem now is obstacles to investment: the highest corporate tax rate in the world, onerous regulation, the crazyquilt uncertainty of Obamacare. America needs aggressive tax cuts and regulatory rollback. It also needs to spend more on infrastructure, which is becoming a major obstacle to growth. It needs to spend more on R&D, particularly on cutting-edge military R&D. The way to do this, I’ve argued for years, is to emulate Roosevelt’s alphabet-soup federal agencies and put unemployed Americans to work repairing infrastructure at $20 an hour, rather than paying $50 an hour to the construction unions. That’s heresy from a free-marketeer like me, but it makes economic sense and will drive the Democrats crazy.

I tend to support this idea although it is by no means the only thing needed. The CCC of Roosevelt’s New Deal was one of his few good ideas before the war.

The CCC was designed to provide jobs for young men, to relieve families who had difficulty finding jobs during the Great Depression in the United States while at the same time implementing a general natural resource conservation program in every state and territory. Maximum enrollment at any one time was 300,000; in nine years 3 million young men participated in the CCC, which provided them with shelter, clothing, and food, together with a small wage of $30 a month ($25 of which had to be sent home to their families).

Today, it could provide a healthy alternative to the streets for young black men. The draft in 1941 found that US young men were far healthier than those in 1917 or those in Britain in 1939 when the draft was again instituted in Britain. From 1939:

Contrary to general belief the majority were in work when applying; in 1936 the proportion was 70 per cent. But so obviously unfit were many of these young men that they were rejected on sight by the non-medical staff. 6o,000 men had this experience during the three years 1933-6. In addition, there must be many, some of them no doubt unemployed, who know from their physical condition that it would be useless to apply.

That bit referred to volunteers prior to 1939..

The US experience in 1917 was similar.

“The first adequate physical survey in half a century was made possible when the Selective Service system brought before medical examiners some ten million men. Of the 2,510,000 men between the ages of twenty-one and thirty-one 730,000 (29 percent) were rejected on physical grounds.”

We found it interesting to learn two facts from this article; the first being that the highest number of acceptable draftees were from the countryside and the second involved the malady of flat feet -which effected one out of every five American men at that time.

33 thoughts on “The Depression may be here.”