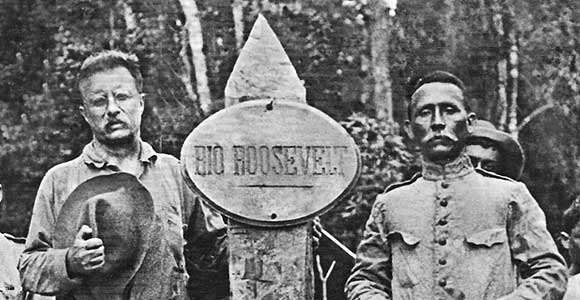 In 1913-14 former president Theodore Roosevelt embarked on an exploratory expedition into the Brazilian wilderness. The expedition was beset by serious difficulties and Roosevelt almost died. The literary fruit of this ordeal was Roosevelt’s book Through the Brazilian Wilderness (1914). I am currently reading it and I recommend it highly.

The Roosevelt–Rondon Scientific Expedition was led by the Rough Rider, as well as the amazing Brazilian explorer Cândido Rondon:

“Colonel Rondon [had] been for a quarter of a century the foremost explorer of the Brazilian hinterland.” Roosevelt on Rondon:

On the Brazilian boundary we met a shallow river steamer carrying Colonel Candido Mariano da Silva Rondon and several other Brazilian members of the expedition. Colonel Rondon immediately showed that he was all, and more than all, that could be desired. It was evident that he knew his business thoroughly, and it was equally evident that he would be a pleasant companion. He was a classmate of Mr. Lauro Muller at the Brazilian Military Academy. He is of almost pure Indian blood, and is a Positivist—the Positivists are a really strong body in Brazil, as they are in France and indeed in Chile. The colonel’s seven children have all been formally made members of the Positivist Church in Rio Janeiro. Brazil possesses the same complete liberty in matters religious, spiritual, and intellectual as we, for our great good fortune, do in the United States, and my Brazilian companions included Catholics and equally sincere men who described themselves as “libres penseurs.” Colonel Rondon has spent the last twenty-four years in exploring the western highlands of Brazil, pioneering the way for telegraph-lines and railroads. During that time he has travelled some fourteen thousand miles, on territory most of which had not previously been traversed by civilized man, and has built three thousand miles of telegraph. He has an exceptional knowledge of the Indian tribes and has always zealously endeavored to serve them and indeed to serve the cause of humanity wherever and whenever he was able.

Theodore Roosevelt was an excellent writer. I previously read The Rough Riders which is a superb book.

I am about halfway into Through the Brazilian Wilderness. The expedition is still going well, and though conditions are hard, the wheels have not yet come off. I am sure Roosevelt will be blunt and accurate in his descriptions, as he was in The Rough Riders, and unsparing of himself to the extent his own errors caused the expedition to go awry.

There are many excellent passages in this book, but I will limit myself to this one which contains a typical detailed naturalistic description, but takes an unusually philosophical turn:

At the close of the day, when we were almost back at the river, the dogs killed a jaguar kitten. There was no trace of the mother. Some accident must have befallen her, and the kitten was trying to shift for herself. She was very emaciated. In her stomach were the remains of a pigeon and some tendons from the skeleton or dried carcass of some big animal. The loathsome berni flies, which deposit eggs in living beings—cattle, dogs, monkeys, rodents, men—had been at it. There were seven huge, white grubs making big abscess-like swellings over its eyes. These flies deposit their grubs in men. In 1909, on Colonel Rondon’s hardest trip, every man of the party had from one to five grubs deposited in him, the fly acting with great speed, and driving its ovipositor through clothing. The grubs cause torture; but a couple of cross cuts with a lancet permit the loathsome creatures to be squeezed out.

In these forests the multitude of insects that bite, sting, devour, and prey upon other creatures, often with accompaniments of atrocious suffering, passes belief. The very pathetic myth of “beneficent nature” could not deceive even the least wise being if he once saw for himself the iron cruelty of life in the tropics. Of course “nature”— in common parlance a wholly inaccurate term, by the way, especially when used as if to express a single entity—is entirely ruthless, no less so as regards types than as regards individuals, and entirely indifferent to good or evil, and works out her ends or no ends with utter disregard of pain and woe.

There is some remarkable video from the expedition: Part I here and Part II here.

Theodore Roosevelt was a realist, but not a cynic. He was a practical idealist. He was a patriot. He had physical courage.

In my view, with hindsight, Theodore Roosevelt was seriously wrong in many of his domestic policy decisions.

But I cannot disparage the man.

They do not make them like Theodore Roosevelt anymore.