This billboard is in my River North neighborhood in Chicago. It is an advertisement for a mall and entertainment location in Rosemont, a small city near O’Hare airport. 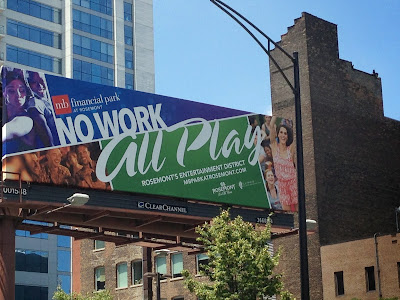 Rosemont was profiled by the Chicago Tribune in this excellent article. A single family has run Rosemont for generations, and they benefit from a levy on taxi rides from O’Hare and spend this money on no-bid contracts for friends, family and politicians as well as large entertainment complexes underwritten by large amounts of debt.

The suburb is digging itself deeper into debt to subsidize a new bar district, professional softball stadium and outlet mall. With $370 million in taxpayer-backed loans outstanding, Rosemont has one of the top debt loads in the Chicago region.

Another Chicago suburb, Bridgeview, hosts a stadium for the Chicago Fire, a major-league soccer team. Their debacle is chronicled here, in a typically great Bloomberg article.

The mayor of Bridgeview, Illinois, said building a taxpayer-financed arena for the billionaire owner of Major League Soccer’s Chicago Fire would bring hotels and restaurants to his suburb. Instead, the town has more than doubled property taxes and may raise them again to pay more than $200 million in stadium debt.

One of the big problems in Illinois is that we have so many various overlapping public bodies, many with the ability to issue debt and all of whom have expensive board members, employees, and often public contracts doled out to associated cronies. This article, from the “Illinois Policy” web site, describes the myriad overlapping public entities in the State of Illinois and how we dwarf ALL states and especially neighboring (and much better managed) states like Indiana.

Illinoisans suffer from the second-highest property tax rates in the nation.

Their state is the third most corrupt in the nation.

When Illinois finally hits the wall, and we won’t be able to issue new debt (and thus an immediate fiscal crisis will occur), we will have to have a reckoning with all of these various entities, each of whom has their own debt problems and the ability to create NEW problems by issuing MORE debt. On one hand, the market will constrain their ability to sell debt by the fact that these insolvent entities survive through the “implied” promise that they will be bailed out by some higher power, whether that is a county, state, or Federal government.

The act of unwinding all of the problems of the inter-related corrupt and insolvent entities will be a herculean task, made even more difficult by the fact that there will be little incentive for the politicians to solve the crisis if the end result is that they won’t have these same public entities for no-bid contracts, jobs for themselves, and their campaign workers and donors once the clean-up is complete.
The only thing for certain is that the lawyers in the state will feast at the trough of lawsuits from all parties. They just need to make sure that they find a way to get paid themselves on a timely basis…

11 thoughts on “Adding to Illinois’ Debacle”