Riot Fest in Chicago was held over three very cold and rainy / muddy days in Chicago’s Humboldt Park in September. I went with a friend on Friday which was cold, rainy, muddy and insane and on Sunday when the weather was nice (still cold) and the mud had somewhat hardened. Riot Fest is more of a fan-friendly (cheaper) Lollapalooza with a bigger dose of punk / emo bands and without any of the EDM flavor that you get from Lolla (and get on a massive scale elsewhere). It was also held in Humboldt Park which is relatively far afield for the more gentrified classes but actually is closer to where the younger fans of this music might actually live and work. For me, it was an opportunity to see some of the bands I like such as Social Distortion, Mastodon, Slayer, Primus, Weezer and the Afghan Whigs. Definitely skewing a bit older for certain.


Here is Gwar! I wasn’t a huge fan of Gwar before seeing them live but they put on an awesome show that needs to be seen to be believed, where they kill a giant dinosaur and banter with the crowd in a completely disturbing manner. At one point they wanted everyone to put their heads down for a moment of silence (their former front man died recently) but then their deranged emcee said that everyone was looking down for a crack rock that the band had dropped since they couldn’t do this sort of stuff sober. They also sprayed everyone near the front with fake blood which is their trademark – many fans throughout the park for the rest of the day looked a bit sunburned from the residue of their pinkish hue thanks to Gwar. 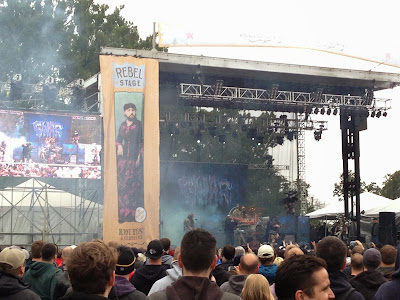 Riot Fest had great food and it was very reasonable. They had a Cevapcici stand where I had a great Serbian sausage for about $7 and all kinds of different items, not just the usual “festival” type stuff. Fortunately they set up most of these stands on the roads that curve through the park so they didn’t sink into the mud. 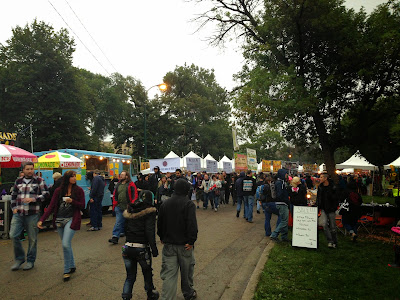 Riot Fest also had cheap beer at $7 / each, with a wide variety and many local brews not shown at this stand. They were definitely keeping it fan-friendly in this crucial department. Of course, many of the fans went with pot instead, and there were clouds of it throughout the days and nights. Since we were older, nearby fans first looked at us to see if we were narcs before lighting up. On Friday the weather became horrible and the whole place was a muddy quagmire. It was the type of mud where your shoes would literally get stuck and you had to pick them up periodically to ensure you would be able to move. A few were doing face plants and every bit of the festival that wasn’t concrete was just a mess. We had VIP tickets which meant that there were a few areas with a tent (nothing glamorous, just benches and less rain, no heat) that we could recover to which was great since there was no place to sit down and eat or recover for a bit. A friend texted me and said she was “VIP of mud”. 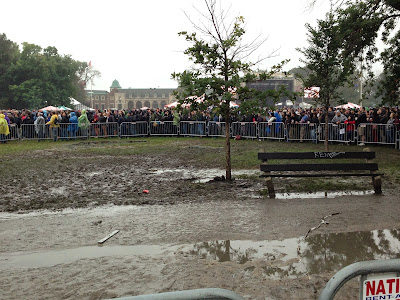 You could also watch the show from behind the VIP fence. This was a pretty good idea because it was a bit less nuts than being stuck out in the crowd for the bigger shows, and they had beer and some food stands in the VIP area, too. Of course you looked at the stage from the side and missed an opportunity for Gwar blood, for example, but it was a good way to see the show overall. Here’s the view waiting for Social Distortion, who were strangely a bit muted and quieter. 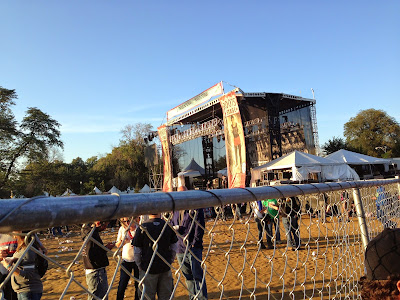 Primus was a big headliner and I was waiting to see them. They did some great songs earlier on but then just sort of noodled. It was strange they must have seen the crowd being restless but then again who knows what Les and gang are thinking. We had to get out of the park so we started to go through the crowd and then it was a bit crazy getting out to the road that led out of the viewing area because people were also pouring in for the headliners and you had a bit of those feelings in your stomach when you know that the crowd can just get too much and crush you. It would have been ironic to get crushed near a dumb arcade since those setups were blocking everything but in the end we just got past everyone and all was fine. 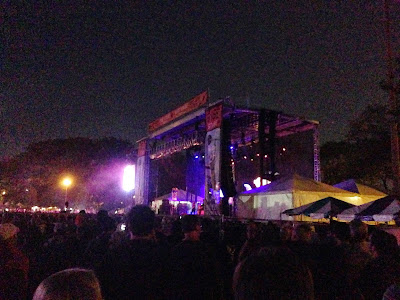 What was good about Riot Fest?


– the price was reasonable, and beer and food were fan friendly

– they had a good lineup, in my opinion at least, even though I missed the Replacements who were here last year

– the VIP tents were a good idea, they weren’t too much more and gave you a chance to get out of the crazy crowd and made it feasible to bring kids or older people to the show

What needed improvement about Riot Fest?

– the phone and wireless was terrible. How hard could it be to set up a wi-fi system for everyone in the park?

– the bands were often pretty quiet, but that probably was due to all the stages set up and they didn’t want to drown anyone out

Humboldt Park turned out to be pretty cool. They had nearby bars packed full of younger people drinking cheap beer and eating cheap food like Wicker Park in 1990. We had beers for $3 when we escaped the weather Friday night and 4 tacos and chips / guacamole was $16 in a fun bar near California and Division. Just like the olden days… although it was a bit difficult getting a cab each way you could Uber and since we left earlier we didn’t have any trouble getting away (and we didn’t mind spending $15 for a cab since we are older, too).